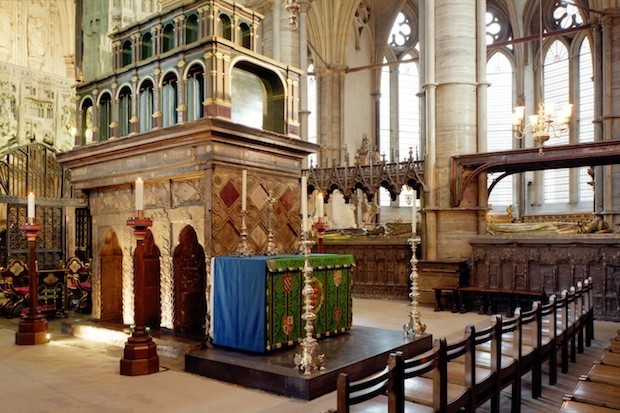 The shrine of Saint Edward the Confessor in Westminster Abbey remains where it was after the final translation of his body to a chapel east of the sanctuary on 13 October 1269 by Henry II.  It is closed off from the west by a stone screen, probably of 15th century date, carved with scenes from the Confessor’s life.

Work is in progress to conserve the floor of this chapel and during this time public access is restricted.

For some time the Abbey had claimed that it possessed a set of coronation regalia that Edward had left for use in all future coronations.  Following Edward’s canonisation, these were regarded as holy relics, and thereafter they were used at all English coronations from the 13th century until the destruction of the regalia by Oliver Cromwell in 1649.

The Right Reverend Dr John Hall, Dean of Westminster worked with VocalEyes Describer Veronika Hyks on the description of The shrine of Saint Edward the Confessor for London Beyond Sight.

On exiting Westminster underground, cross over the main road (Westminster Bridge Road) by the traffic light controlled crossing and pass in front of the Houses of Parliament on your left.  In front of you, to the right is Westminster Abbey which can be reached by crossing another main road (Parliament Street).  There is a traffic light controlled crossing on the right to Parliament Square; the main entrance (North Door) to the Abbey is halfway along the road on the left.

The North Door entrance to the Abbey has three sets of doors.  The first opens automatically, the second set you have to pull towards you to open and the third set you have to push.  There is a moderate slope to access this area. There are level changes, restricted height doorways and steps within certain parts of the Abbey.

The Chapel containing the shrine of St. Edward the Confessor lies east of the Sanctuary at the heart of the Abbey.  It is closed off from the west by a carved stone screen.  Work is in progress to conserve the floor of this chapel and during this time public access is restricted.

A Touch Tour is available for blind and partially sighted visitors and the Abbey provides large-print and Braille versions of the Welcome Leaflet, a Braille booklet covering St Margaret’s Church and tactile maps in Braille of the Abbey.  Touch Tours should be booked in advance:[email protected], 020 7654 4871

There is a charge payable for entrance to the Abbey.

Parking – The Abbey does not have its own car park, although there is a public car park (Abingdon Car Park) located to the south of the Abbey in Great College Street.  There are no designated Blue Badge bays nor is there a designated drop off point.