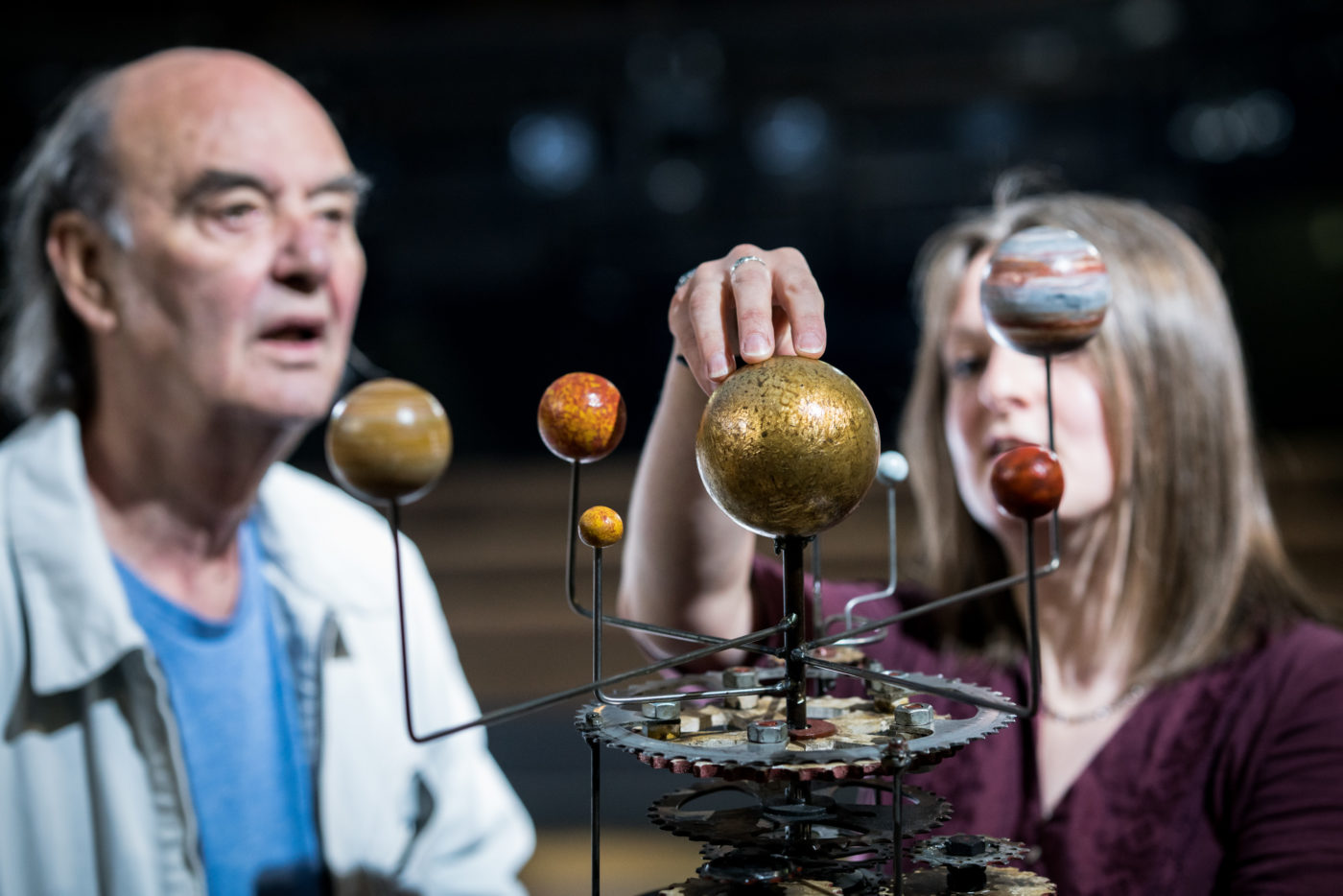 I’m interested in models of all kinds – from dolls houses and architectural sketches to ‘stick and ball’ representations of atoms and molecules. As part of my research in the Jocelyn Herbert Archive at the National Theatre, I looked at how theatre designers use scale models as a tool of communication. This opened up ideas about the potential of models to enrich discussions and improve access to theatre design for blind and partially sighted audience members.

In June 2017, I happened to be looking at two different designs for Brecht’s play, The Life of Galileo, at the same time. In the archive, I was looking at the 1980 production for the Olivier Theatre, designed by Jocelyn Herbert. Down the road at the Young Vic, I was getting ready to audio describe a new production designed by Lizzie Clachan.

Jocelyn Herbert’s 1980 design used the Olivier in unexpected ways. The three metal shutters leading to the scene dock, usually kept inconspicuous by being closed and painted black, were instead polished and opened up during the performance. A huge metal armillary sphere (a model of the planets) hung down from above as the audience came in. At the beginning of the play, it flew out as a wooden platform slid forward from the scene dock at the back, bearing Michael Gambon as Galileo, standing beside a wooden table holding his astronomical instruments – and his breakfast.

The National Theatre Archive holds ground plans, set and costume drawings and storyboards showing the settings scene by scene. There are scale model pieces made of various materials including painted card, balsa wood and soldered metal, but not a full set model. Complete set models are very rarely kept – they are bulky, made of relatively fragile materials like card, and are often damaged in the production process. Even if a complete model of this production had been available for a touch tour, it wouldn’t have made sense without an explanation of how the different elements moved through the space in the course of the performance – set models are not self-explanatory.

Lizzie Clachan’s design for the Young Vic also took in the wider space to express planetary themes. The seating was arranged in the round, with a central playing area and a circular projection screen hanging above it. Sitting in the audience, the space seemed to evoke both a model of the solar system, with the benches forming orbits around the central focus, and also a contemporary planetarium, with projections of the stars on the screen overhead.

During the touch tour, we were able to walk around the space, but a tactile model would have helped to convey how the whole auditorium expressed the themes of the production. We explored how the projection screen affected the sound, but a model would have shown its position in the space.

The play turns around conflicting models of how the solar system works – the planets going round the earth or round the sun – and Galileo uses physical models in his teaching. During the touch tour, the three prop models became rich talking points: two astrolabes representing the geocentric and heliocentric models of the solar system, as well as a spectacular prop costume representing the medieval concept of the Great Chain of Being. A series of wooden ring-shaped shelves hung down around the performer’s body, each carrying model figures belonging to a different category in the hierarchy of human and animal life. In a busy carnival scene, the beautiful detail in this object, made by puppeteer Lyndie Wright, passed by all too rapidly, but in the touch tour it was the focus for discussion about how the script, performance and visual elements worked together.

Changes in theatre practice, both in technology and contracts, could open up the potential of models for access. Three-dimensional model-making is now typically supplemented (if not replaced), by digital modelling. The fact that digital dimensions have already been plotted makes it relatively easy to produce a laser-cut or 3D-printed tactile model in robust materials. More recently, new contracts for theatre designers agreed by Equity and the Society of British Theatre Designers recognise for the first time the real costs of model-making. This opens up the possibility of commissioning imaginative models for use in education or access.

An audio guide to the exhibition Playing with Scale is available on the National Theatre website and there is an online version of the exhibition on Google Arts and Culture.

Image at top of page: Exploring a prop model of the solar system on the touch tour for Galileo (Young Vic, 2017). Photo: Leon Puplett