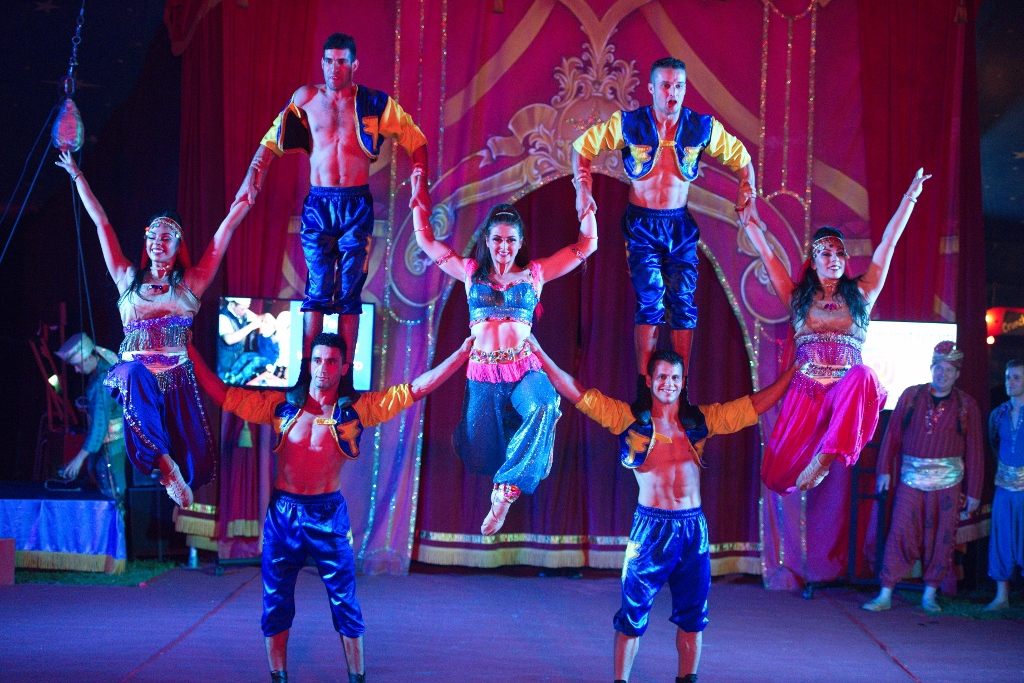 Circus Starr is a touring circus starring world-class, professional artists from across the world. Founded in 1987, it is a not-for-profit social enterprise operating a unique ‘donated ticket programme’ that allows thousands of children, along with their families, to attend free shows thanks to the support of local businesses.

The Circus’s ethos is to welcome all disadvantaged, disabled or vulnerable children and the organisation and company make every effort to ensure their visit is an enjoyable one. For some years Circus Starr has allocated free tickets to groups that support blind and partially sighted children and their families but have not had the resources or expertise to provide audio described performances. So they approached VocalEyes to support them in running a pilot in order to explore how the shows could be made more accessible to those with visual impairments in future.

After discussion with Rachel, Circus Starr’s Community Engagement Officer, it was decided to explore which of these elements would work.  VocalEyes describers Roz and Jane attended two shows as preparation. Meanwhile, Rachel and the Circus Starr administrative team contacted local groups that work with blind and partially sighted children and offered free tickets for three performances, at Coventry, Milton Keynes and Luton, between 7th and 11th October.

Through work VocalEyes has done previously with children’s groups such as at the Unicorn Theatre and Mousetrap Theatre Projects, we know that children between the ages of 5 and 11 have little appetite for pre-recorded introductions, so we decided to substitute a sensory box for this element. In discussion with Joanna Grace, a special educational needs and disabilities consultant and the founder of The Sensory Projects, and audio-describer Roz, objects were selected and sourced to touch, smell and taste. These items were relevant to the shows the children were going to attend and were presented in a vintage style trunk of the sort that would belong to a globe-trotting, circus clown.

Rachel then loaned out the ‘sensory circus trunk’ to groups to explore independently, as well as presenting them at a social meeting to a mixed age group and on a home visit to an individual child prior to the shows. It was well received. A popular object was a colourful scarf edged with gold coin chain fringing similar to the Arabian costumes worn by the female circus performers. The children enjoyed tying them around their bodies and moving to make them jangle.

In order to involve and prepare the other performers beforehand, VocalEyes Deputy Director Toby Davey delivered a visual awareness training session. The whole company attended, going through communication and guiding exercises. They were asked what they would like to contribute to the touch tour and each planned their own input, dependent on their own particular skills, the equipment they used and their English language skills. 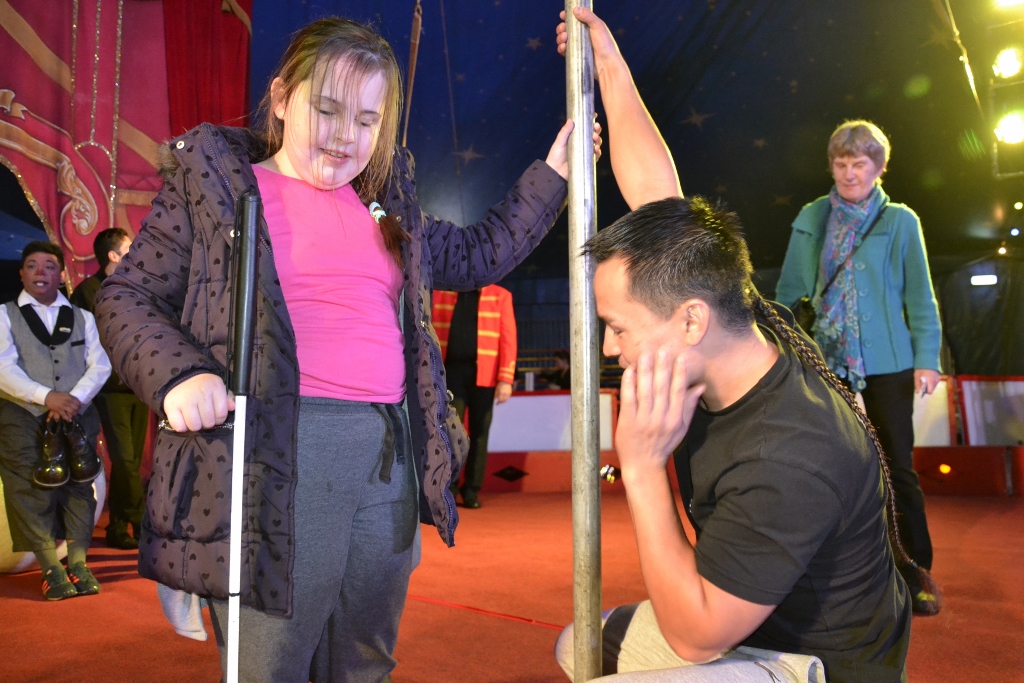 The structure of the touch tour had been discussed with Show Manager Robert Price, and was devised to include the use of some of the circus equipment and allow the children to experience some of the apparatus. The touch tours were particularly successful, with the entire company getting involved.  After a brief initial description of the space and an introduction to the artists and stage crew, children stood and lay down in the space wheel, balanced on giant rolling globes with the help of the artists, explored the Minion and camel costumes and were encouraged to guess how long it would take an artist to climb the Chinese poles to the roof of the Big Top, giving them some spatial awareness.

Objects were placed far enough apart to allow safe movement and at the describers’ request Robert had arranged extra lighting in darker spaces.  A working model of the ‘space wheel’ – a particularly spectacular act – had been constructed as a handling object by describer Roz Chalmers and her husband, to provide the children with an insight into how it was used. The model proved popular with the artists who used it, as it supported their English skills.

For the description of the show itself, we had initially considered training Robert, the Show Manager, who also acts as the Ringmaster, in descriptive principles, to enable him to interweave description with his show announcements.  This would have allowed audio description to be embedded in the company. However, after observing a performance it was clear this would not be possible. Robert’s heavy workload behind the scenes and during the show would not allow him to take on an extra role. Also, the sound system he uses to introduce the acts does not have sufficient power or clarity to compete against the high sound levels in the tent for prolonged periods. Other members of the company are also working at full stretch during the performances, alternating between performing, backstage work and front-of-house roles.  As an international company, a number of people have English as a second or third language which precludes them from providing the description.

So, we agreed to trial the more standard form of ‘through description’ where the listener receives information through a headset. This would help with noise levels and enable the description to be contextualised. We used the portable radio equipment thatVocalEyes uses regularly for open air theatre, opera and festivals. The describer sat in in the back row of the auditorium, using a sport commentators’ lip mic – essential in these conditions.  That and the loud music that plays throughout the show masked their voices from adjacent audience members.

The describers agreed that it would be best to provide unscripted description to allow for the unpredictably of live circus performance, but had prepared a broad framework that identified key parts of each act, and the degree of difficulty.  They divided the performances between them, and kept in close touch and shared any difficulties and gave tips.

Approximately 40% of the children used the headsets during the performance. The great majority of them opted for the over-the-ear headsets – unsurprising as the stethosets are heavy and made for adult ears. They were told that the description would begin at a music change two minutes before the show went up so they would not have to wear the sets for long before the show.

“The audio description was terrific! My son couldn’t stop giggling when the audio describer unexpectedly gasped when one performer almost lost her footing during the rolling globe act.”

“Kyla really enjoyed the show – she has been for a few years now and when she came home yesterday she was non-stop talking about everything!! She loved the touch tour as she got to touch various equipment and meet some of the entertainers. In turn this helped her to understand a bit more about the show and how it is put together.  She really appreciated the audio description as well as this was the first time this has been available at a circus.”

VocalEyes and Circus Starr would like to thank the MFPA Trust Fund for Disabled Children in the Arts for their generous support of this pilot project.