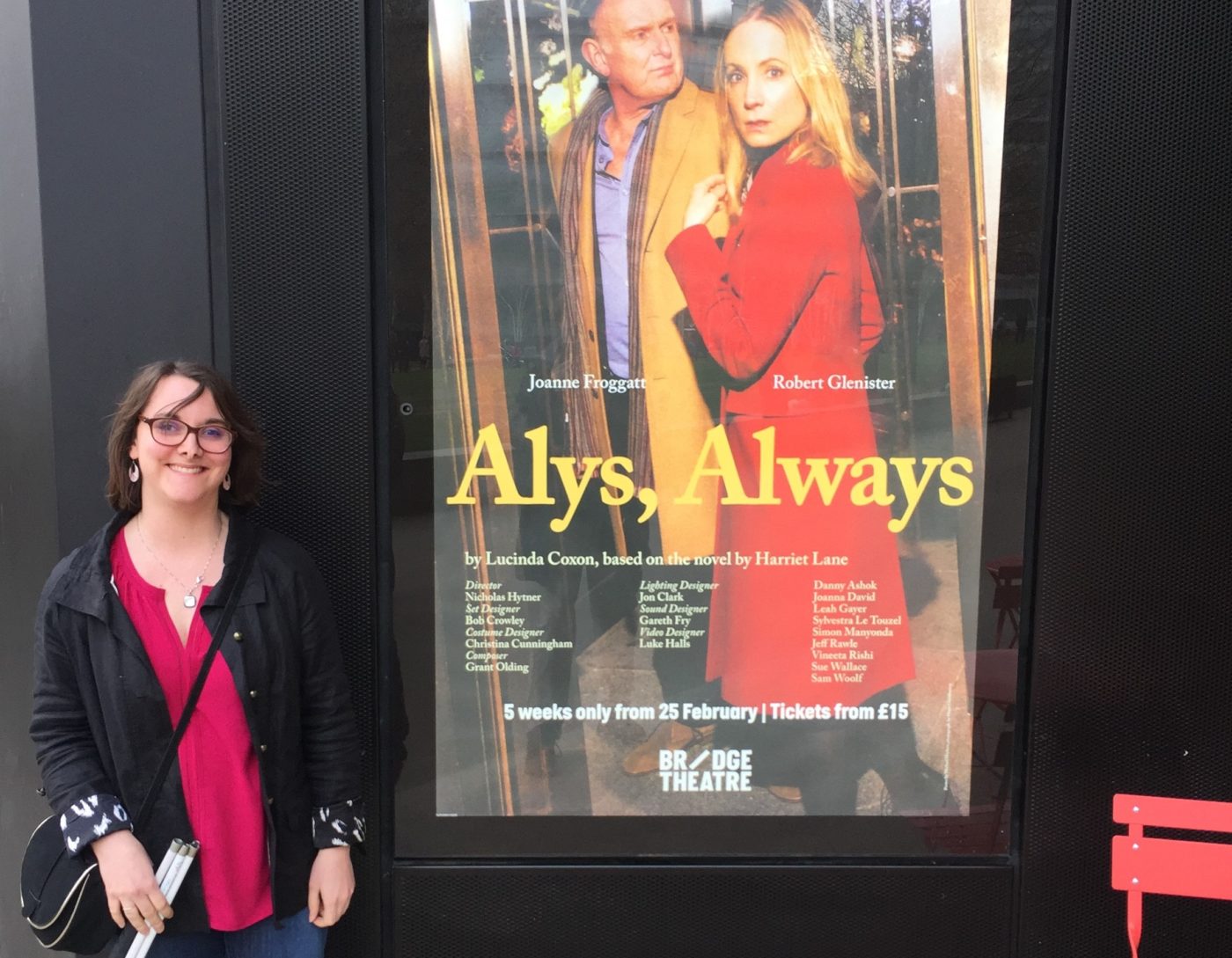 I’ve been severely visually impaired since birth. I enjoy lots of cultural events and performances, many of which have been enhanced by audio description (AD) provided by VocalEyes.

At the theatre, AD offers detailed information about what is happening on stage and a much richer experience than solely relying on my limited eyesight. I also sometimes use a monocular (like a small telescope) to spot certain details on stage. AD is usually provided through a headset in order to hear descriptions of characters, props, expressions and gestures spoken by a trained audio-describer during pauses or silences in the dialogue.

My boyfriend and I went to see Alys, Always (starring Joanne Froggatt and Robert Glenister) at the Bridge Theatre on Saturday 30 March. Frances (Froggatt) works as a journalist in the Books Section of a newspaper. One winter evening, she comes across a crashed car by the side of a road and waits with the injured driver, Alys Kyte, until the ambulance arrives.

When Alys’s famous literary family wants to meet her, Frances finds herself involved in a world she never imagined being part of. The audience gets to see the stark contrast between those who have everything and those who don’t, and the difficult choices Frances must make.

As is often the case before an audio-described performance, there was a touch tour on that day. Touch tours enable visually impaired members of the audience to explore the stage, props and costumes and even sometimes to meet members of the cast, which is always very special.

During this tour, we were lucky to meet several actors including Joanne Froggatt. The actors described the characters they portrayed and any significant features such as clothes and specific mannerisms. We were also able to move around the stage, to explore the newspaper’s office and discover how different spaces were created with gauze panels, projections and moving floor sections. Learning about all these different elements increased our overall understanding and enjoyment of the performance.

Between the touch tour and the performance there was time for a lunch break and then we picked up our headsets near the box office. These were Sennheiser Radio Receiver systems, made up of a separate receiver and headphones. This system was very comfortable and worked perfectly throughout the performance – the sound was crisp and clear.

Just before the performance, we listened to pre-show notes (equivalent to the programme sighted members of the audience can read). These notes give a brief synopsis of the play, a detailed description of the characters, set and other important information. VocalEyes make these pre-show notes available in different formats on their website or as audio CDs (sent through the post) which can be handy to look at before a performance. Cast lists can also be provided in large print or braille if needed and are available from front-of-house staff.

A big thank you to all the friendly staff at the Bridge theatre who made us very welcome and to VocalEyes and the wonderful audio describers, Kate Tayor-Davies and Clare LeMay, for making another play so accessible and enabling us to have such a great afternoon at the theatre.

Sadly, this was the last performance of the play, but if the story interests you, the original novel by Harriet Lane is available as a Talking Book through the RNIB. Check out what’s coming up audio-described near you soon.

Claire Amoroso is a visually impaired translator based near London.