About»Research»Inclusive Description for Equality and Access (IDEA)»AD Co-creation workshop at the Donmar Warehouse: Love and other acts of violence 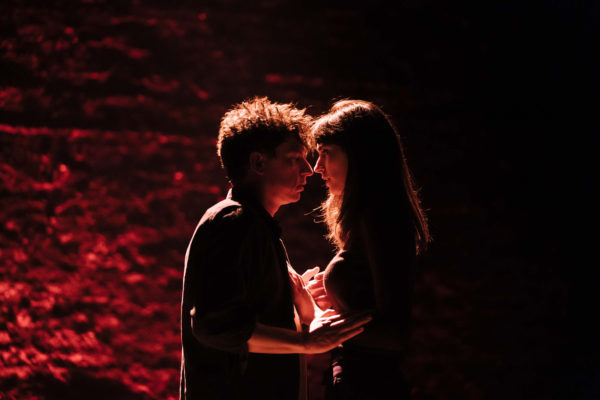 The team at the Donmar Warehouse was keen to take an experimental approach to the audio description for their production Love and other acts of violence. We brought together cast members, the audio describers and AD users to discuss the Audio Introduction. We also had the benefit of a prior call with designer Basia Bińkowska, who introduced us to the visual world of the play and its metaphorical meanings.

This play is presented to us in two distinct sections. In the first, the setting is not specific to time or place. The action is played on a wooden platform that seems to hover above the floor. Its colour and detail suggest wood grain, and it is surrounded by mounds of soil. There are no props in use. Rapid scene changes are marked by the use of sound, by the actors’ positioning on stage, and by dramatic changes in lighting.

Later, a new set descends from the ceiling, which depicts a kitchen and living space inside a 1918 house in Lemberg (modern day Lviv, Ukraine). This set is rich in naturalistic detail, such as the wooden furniture, toys, ceramic tiles and even a stove which was commissioned specifically for the production according to the designer’s specifications.

As you would expect, the characters themselves are carefully constructed through their costumes. The 1918 costumes have been carefully researched to suggest the characters’ place in time and society. Some critical visual details link the contemporary and the historic, such as the hairstyle of Abigail Weinstock’s two characters. We shall say no more for risk of spoilers!

Our workshop participants gathered together armed with the draft Audio Introduction and the insights from Basia to discuss. To structure the session, we asked the actors Abigail Weinstock and Richard Katz firstly to describe their characters, and the two sets. We then shared with them the relevant sections of the Audio Introduction.

When thinking about the visual characteristics of his character, Tatte, Richard emphasised the conservative appearance of his clothes, such as his long black coat, black waistcoat and hat. This helps us to understand that he is an orthodox Jew, and Richard felt he would want the sombre nature of his apparel to come across in order to help place Tatte in his culture, time and location. He also thought it would be important to explain that his character walks with a limp and uses a walking stick. The AD users agreed this would be useful information as it might create sounds on stage that the AD could then account for. Finally, Richard said he would want to bring out the stillness of his character, who is in a situation where he must sit, wait and endure.

As he listened to the description of Tatte which had been written by VocalEyes describers Eleanor Margolies and Michael Skellern, Richard agreed that this brought the character to life for him by capturing the costume, movement, demeanour and appearance in a rich and evocative way.  He particularly liked the reference to Tatte’s movements being ‘deliberate’ and ‘precise’ as he felt this conveyed the stillness of the character. As Richard reminded us, theatre happens in the imagination of the audience. This means that the audio describers have a balance to strike. They must provide enough detail to enable listeners to build an impression of the characters and sets, but without filling in too much, which would not leave room for interpretation. As one AD user reminded us, blind theatregoers should have the same opportunity to come up with an infinite number of possible interpretations of a piece, just as non-blind audience members would do.

Abigail and her group also discussed the descriptions of the set. The actors were generally somewhat surprised by the amount of detail in the Audio Introduction. This led to discussions about what your ‘average viewer’ might notice – would they take in as much visual detail as the Audio Introduction provides? Does this mean that AD users actually get a privileged kind of access to the visual world of the play, and does this matter? Our view is that yes, AD can help users gain insight into creative processes and metaphorical meanings that may or may not be apparent to other, non-blind theatregoers. We think this is a good thing and we are all for it! But it is another good reason to make Audio Introductions available to everyone. As one of our workshop participants put it, it could provide a kind of ‘guided tour in words’ – a resource that we believe would benefit many people who wish to engage with the subtle layers of meaning that can be drawn from the visual world of this play.

After the audio described performance, we were pleased to run a post-show discussion with the actors and audio describers, which gave the opportunity for the audience to ask questions. The event also attracted non-blind audience members, some of whom had never heard of AD before and had listened to it that day for the first time.

The workshop and post-show discussion provided space for reflection and contribution to the AD from people who would not usually have the chance to get involved.  With our next Donmar Warehouse production, we will start this process earlier, before the AD is even written. More soon!