On 22nd July, the IDEA project ran an event with Mind the Gap theatre, one of Europe’s leading theatres of learning-disabled people, and Vicky Ackroyd from Totally Inclusive People. The event showcased the innovative audio description of a new film, A Little Space, produced by Mind the Gap and funded by The Space.

A Little Space was created by Mind the Gap and Gecko in 2019 and toured as a theatre production with traditional audio description, written by Vicky Ackroyd. The film version, created in summer 2021, brought something new. It was filmed on the set of A Little Space, but was much more than a straightforward recording of a stage production. As Mind the Gap Producer Deborah said, ‘it has all the essence, all the beauty, all the lovely physical movements that the stage production had, but with the added value of close up, moving shots.’ This new approach to a hybrid film/theatre production inspired the idea of doing something new with the audio description, supported by the IDEA project. 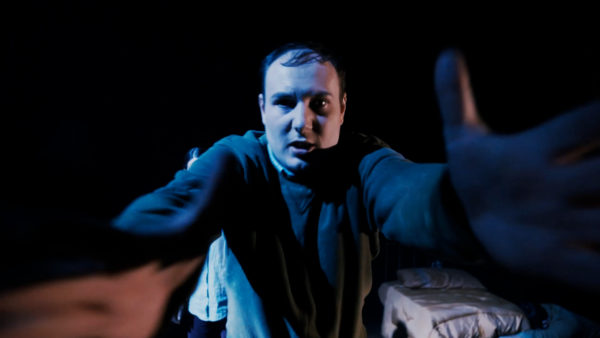 Mind the Gap Artist Paul, a white man in his 30s wearing a blue sweatshirt, stretches his hands towards the camera with a determined expression.

Paul, one of the performers from A Little Space, delivers the audio description. Amazingly, he did not use a script. Instead, he uses his knowledge of the emotional journey of the piece to audio describe in the moment, working in collaboration with Vicky, a professional audio describer, over the course of two days. As Vicky said during our showcase: ‘It was very much about Paul just living in the moment, which I think brings a real richness to it.’

Paul explained that their approach to the audio description drew on a rehearsal technique used during the filming – Italian rehearsals – which involves the performers talking through what they are doing as they do it, as a way to deepen their understanding and memory of the performance that they are creating. As they talked through their movements and their use of props, it was clear that Paul was a natural at this technique. From here, the idea of using this technique to create the audio description came about.

What resulted was an interpretative, emotionally charged audio description that flows seamlessly with the tone and action of the piece. The guests at our Showcase, both blind and non-blind alike, loved the audio description and agreed that it enhanced their understanding and enjoyment of the performance.

The film of A Little Space also included an Audio Introduction by Vicky. This is in itself innovative as films do not usually have AIs, although VocalEyes are working to change this with their 100 Videos Described project and film AD service. We’d love to see more of this. As Vicky said: ‘these are really interesting times for audio description…I’m really excited at the prospect of changing practice and doing something different.’

Congratulations to Mind the Gap, Vicky and Paul on their successful and experimental audio description and thank you for sharing it with us.

Mind the Gap have also made a short video about the audio description.

The audio described film of A Little Space is no longer publicly available on line. If you would like to access it, please contact Rachel Hutchinson [email protected]

If you missed the Showcase and would like to catch up on it, here is an audio recording and transcript: