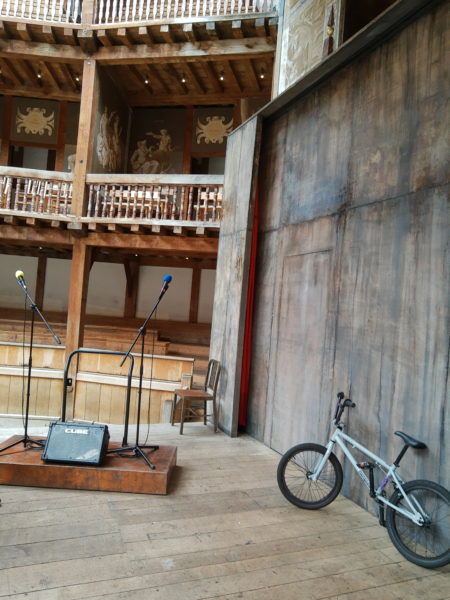 A BMX bike leans against a shabby, stained industrial looking wall. Two microphones are ready on a platform to the left. The stage is set for this gritty, urban staging of Romeo & Juliet.

On July 9th, the IDEA project hosted a Diversity Description workshop at Shakespeare’s Globe, to discuss the audio description for Romeo & Juliet.

It was facilitated by Arti Prashar, formerly Artistic Director of Spare Tyre and a leading theatre consultant who specialises in inclusive practice. We were joined by Tony McBride, Audio Describer for VocalEyes and who has written the AD for Romeo & Juliet; three members of the cast; three users of Audio Description; and David Bellwood, the Globe’s Access Manager. The cast member were Silas Carson, who plays Capulet , Zoe West, who plays Benvolio and Dwane Walcott, who plays Paris and the Prince.

Arti opened the workshop with introductions, encouraging everyone to offer a short description of themselves to make the workshop accessible to all present. We then launched into our discussions about Romeo & Juliet and AD more broadly.

Arti kicked off by asking an apparently simple question: what is AD to you? It quickly became clear that some of the cast members were already familiar with AD, and others had never listened to any before. We explained that AD aims to describe the visual world of the play, as well as key visual information about the action or movement on stage. Silas thought about how he would describe Capulet. He felt it would be particularly important to describe his character’s scars, which are designed to represent the violence of Verona. In this production of Romeo & Juliet, the company are addressing mental health issues and suicidal tendances in young people, all of which are exacerbated by the current pandemic. He felt that capturing this aspect of the ‘visual language’ of the play would be important for the AD.

The discussion moved on to inclusive casting and whether AD should mention an actor’s race if the casting is incidental and not relevant to the story. Silas explained that sometimes casting seeks to make a point, and sometimes it doesn’t. He said that the hope is that as we move into a more inclusive world, it would be possible for a black actor to be cast in a traditionally ‘white role’ without making any kind of point at all. The only point being: anyone could play the part.

This then begs the question – should AD describe the colour of someone’s skin if it is completely incidental to the part?  Tony asked whether an audio describer should simply say that there is a multi-ethnic cast and leave it there, or whether they should give more information about individuals? And if they do that, then how much information are AD users willing and able to process as they listen to the Audio Introduction?

These were not questions that we were going to resolve in one workshop, but one thing was clear. Some of the AD users present felt strongly that if sighted people have access to information such as the colour of an actor’s skin, then they should not miss out on that. And as Hannah pointed out, there is also the risk that people may assume an actor is white, if they are not given the information. This would be a missed opportunity for representation.

Tony mentioned a specific challenge that he encountered when writing the AD for Romeo & Juliet. Benvolio, a male character, is played by a female actor – Zoe. Tony was not sure how to refer to Benvolio. He didn’t know whether to choose a pronoun, or whether to avoid pronouns altogether by using the name only. He was concerned that a ‘they’ pronoun could be confusing for a listener.

Hannah asked why the character was not renamed Benvolia, to reflect the fact that it was being performed by a woman? This has been done with Shakespeare before. For example, Tamsin Greig played Benvolia at the National Theatre in 2017. Zoe responded that in this instance, it would have felt too binary. As a person who uses she/her pronouns and identifies as genderqueer, she felt that a binary distinction would have been too reductive. As Zoe said, a five-minute conversation between actor and describer would be a positive and inclusive way to resolve any uncertainty or confusion, and she’d be all for finding ways for actors to get more involved in AD.

As we drew the threads of the discussion together, it was clear that some specific ideas for AD development had emerged. We discussed the possibility of using actors’ voices in the Audio Introduction, thereby helping AD users to link voice and character, especially if the actors were to introduce themselves in their characters’ voice.

The actors were also very supportive of using the actor and character questionnaire developed by VocalEyes. They felt that thinking about describing their characters would be valuable as an acting exercise, as well as providing essential information for the AD.

Other sensory inputs such as the use of additional sounds, touch or scent were discussed. Zoe said how great it would be if small pieces of material from the costumes could be sent to AD users ahead of time, so that they could handle them at home if they are not able to attend the touch tour. This would provide additional sensory information to help people engage with the visual world of the play.

It was also noted by our attendees that in Shakespeare, a lot of audio description is actually integrated into the text itself. For example, in the first scene of Romeo & Juliet, several characters are on stage discussing the absent Romeo. When Romeo enters, Benvolio alerts the audience to his arrival by saying:

See, where he comes: so please you, step aside;
I’ll know his grievance, or be much denied.

Zoe mentioned that occasionally, the company takes the decision to remove such a line, on the assumption that the information in it can be seen by the audience. The workshop was a useful prompt to think inclusively about the entire audience, and who might miss out in that situation.

Thanks to all our attendees for a thought-provoking workshop, and a particular thanks to David Bellwood, Access Manager, for his help in setting this up and for being there to contribute on the day.