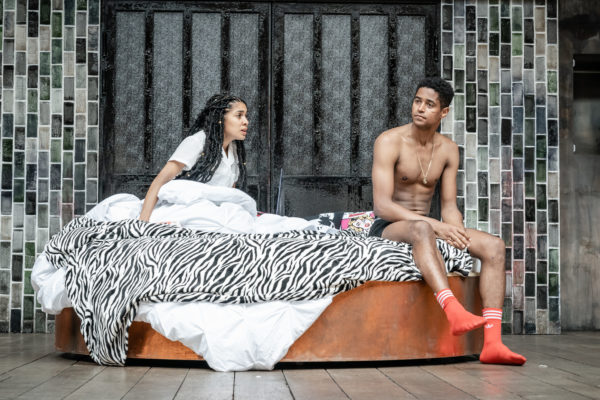 This image shows Rebekah Murrell as Juliet and Alfred Enoch as Romeo. They are sitting together on a large double bed on stage. Photo credit: Marc Brenner

The audio described performance of Romeo & Juliet at Shakespeare’s Globe presented another opportunity to get a group of people together for a discussion about the AD. This time, we were joined by actors Zoe West, who plays Benvolio and Dwane Walcott, who plays Paris and the Prince. Tony McBride and Jane Brambley from VocalEyes attended, as did several users of the audio description, and David Bellwood, Access Manager at Shakespeare’s Globe.

In this production, artistic choices and access came together in really interesting ways. This stimulated a broader discussion about the art of access and how it can be integrated. Tony pointed out that this raises questions about the purpose and remit of audio description. Is the description there to serve the play, or can it become part of the story and change the staging of the play?

In this performance of Romeo & Juliet, two things had happened which served both as artistic choices and as access. At the start of the performance, each actor stepped forward and stated their names and the character they were playing, eg ‘I’m Zoe, and I’m playing Benvolio.’ This gave the AD users an opportunity to match the character to the voice. Non-blind audience members in our discussion agreed that this was helpful for them, too.

The reason for doing this was primarily that the director, Ola Ince, wanted to present the play using Brechtian techniques – in other words, ones that break down the ‘fourth wall’ so that the audience are reminded that they are watching a play. So an artistic choice had direct access benefits for blind audience members, and probably many others besides.

Secondly, a large screen above the stage displayed short text captions with information or statistics about themes in the play such as mental health, suicide, or the safety of women. When this text changed, the actors stepped forward and spoke the text aloud. This now happens for each performance of Romeo & Juliet by this company, not just when it is audio described.

Zoe and Dwayne explained that the motivation behind this was twofold. Firstly, it was also part of Ola Ince’s Brechtian approach to the performance. Secondly, the work of the IDEA project had stimulated discussions about audio description, and Ince decided that rather than have the audio describer read the text, the actors’ reading of it would integrate the access the information into the play itself. We are delighted that the IDEA project raised awareness of AD and influenced this creative decision!

It’s also likely that had the information on the screens simply changed without the text being read aloud, then many seeing members of the audience could have easily missed it. This was a great example of how access and artistic choices can complement each other and serve the wider audience at the same time.

The conversation also turned to the description of the multi-racial cast. The question was posed whether it was relevant or necessary to describe the colour of the actors’ skin. A member of the AD using audience pointed out that for her, it was crucial information. Non-blind people can take that information in visually and choose to either reflect on it or disregard it. The blind audience simply may not know about the diversity of people on stage if it is not included in the audio description. For this user of AD, it was a question of representation. She gave the example of a black, blind audience member who might want to know that they are represented on stage. She also felt it was important that AD users can be part of discussions about diversity in theatres.

She also raised the point about describing body shape, and pointed out that when characters are described as ‘tall and slender’ then it begs the question: are there obese bodies also on stage? Again, without audio description including this information, then the blind audience will not know. This can be difficult and sensitive. While audio description describes the character, in many cases, the body shape and size may be that of the actor. How then to find the right words and to avoid causing hurt or offence?

We concluded that there are no easy answers or list of acceptable terms – different language will be acceptable to different people. This is why it is so important that awareness of AD in theatres continues to increase, so that actors and creatives understand the challenges audio describers face and so opportunities to consult can be created.

Some suggestions for further integrating AD into the creative process were made, and some previous suggestions developed. In a previous event, we discussed using actors’ Spotlight profiles as a resource for audio describers. A theatre professional in the audience explained that there are limitations to this as Spotlight profiles encourage actors to say they ‘look like’ a particular ethnicity/ethnicities, rather than stating what their ethnicity actually is. However, we talked about how the VocalEyes character questionnaire, which asks actors to describe their character, could be drawn out and used in the rehearsal process as a tool for character development. This would simultaneously provide useful information for audio describers. If it is positioned as a creative tool, as well as access, then perhaps this will increase actors’ engagement with it.

Finally, we discussed ways to raise awareness of AD with audiences. A short pre-show announcement could help with this, such as ‘this performance will be audio described for the blind and partially blind members of the audience tonight. This means the visual aspects of the play will be described in words by audio describers X and Y.’ The audio describers could then be applauded at the end of the performance. As Dwayne pointed out, this serves to raise awareness of who is in the audience and how they are accessing the play.

David concluded our discussion by reflecting on the fact that access work is about creating a shared experience, rather than a homogenous experience. We believe that the developments in AD that we discussed further this goal. If theatres can support audio describers in their AD development, and particularly describing diversity, then this results in inclusion both for the blind audience members and for the actors on stage. Although a blind and non-blind audience member will have different experiences (as will every individual in the audience), inclusive AD means those experiences can be fully shared.

Thanks again to David and Shakespeare’s Globe for facilitating a useful and fascinating discussion.