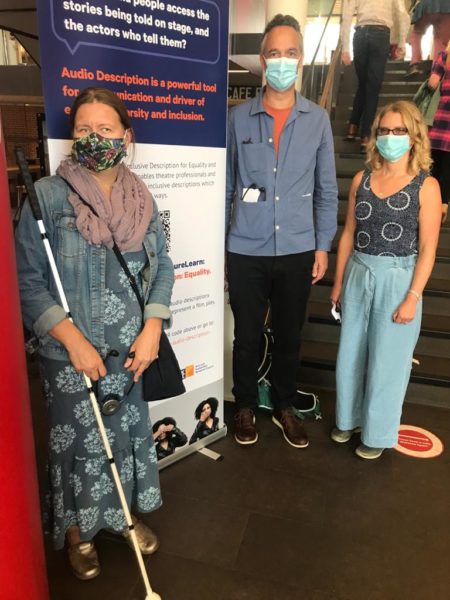 Hannah, Matthew and Rachel stand by a VocalEyes banner in the Globe’s foyer. The title text reads: ‘How do blind people access the stories being told on stage, and the actors who tell them?’

On September 11 we had the pleasure of attending Twelfth Night at Shakespeare’s Globe, followed by a post-show discussion about the AD, hosted by the IDEA project team.

This was an audio described performance with a difference. Usually, the audience would not know that audio description was happening, unless they happened to sit near someone using a headset and ask them about it. This time, the audience were greeted by a large banner in the foyer, produced by VocalEyes, telling them about Audio Description. They could also scan a QR code to learn more about our FutureLearn course: Creating Audio Description: Equality, Diversity, and Inclusion. Do check it out if you haven’t already – the course is now underway, but we have a second run in January.

The information was also provided in flyers which the Globe staff had kindly left on seats throughout the auditorium. It was great to see people picking them up as they took their seats, reading them, and showing them to their friends and family.

There were over 1000 people in the auditorium, so it is more than likely that this information would have caused some audience members to question what they thought they knew about blindness, and blind people’s participation in cultural events. It is also possible that in an audience of that size, there may have been people there who had not heard of Audio Description before but who might actually benefit from using it.

At the end of the performance, VocalEyes Audio Describers Jane and Ess came on stage to take a bow with the cast. It was great to see Audio Description taking centre stage.

After the show, we gathered in a room to discuss the Audio Description with Jane and Ess. One point of interest in describing this performance of Twelfth Night was the gender fluidity of the character Feste, played by Victoria Elliott.  This is usually indicated visually in the play by Vicky changing between ‘feminine’ and ‘masculine’ attire. During our workshop the previous month, Jane and Ess spoke to Vicky about which pronouns to use for Feste, and they settled on ‘they’. On the night, there was an added complication. Vicky had a broken foot, and so the planned costume changes couldn’t happen. The Audio Describers explained in the Audio Introduction that there would have been a costume change, but that it could no longer happen, and they also mentioned the decision to use the ‘they’ pronoun for Feste.  This was an example of Audio description users getting information that the non-blind audience would not have. Without this information, the gender fluidity woven into the part of Feste was much harder to grasp.

We also discussed ways to develop AD in the future. Part of this is thinking about how AD could be useful for many people, for example non-native speakers of English or people who might find it difficult to interpret facial expressions or gestures. Even for people who are not blind, vision can be compromised by a pillar, the sun in your eyes, a pair of glasses left at home, or – a very pertinent problem for many of us at the moment – glasses that steam up with use of a face mask. We also talked about how the Audio Introduction could be useful to people for understanding, for study, or simply for interest and enjoyment. As a result of this discussion, the Globe now plan to send the Audio Introduction out to all ticket holders ahead of a performance, rather than just those booked to use AD. We hope that this will help to raise awareness of AD and the work of VocalEyes further. It should also help expand the reach and impact of the AD by giving people an extra resource to help them engage with Shakespeare and the performance.

Our final point of discussion was the fact that Shakespeare seemed to have audio description in mind when writing Feste’s reflections on the slipperiness of language.

Troth, sir, I can yield you none without words, and words are grown so false, I am loath to prove reason with them.

Capturing theatre in words is indeed a tricky business, and one that we could all have discussed for hours. We look forward to next time!

Thanks again to all who attended our post-show discussion, to Jane and Ess, and to David Bellwood, Access Manager, for all his help.