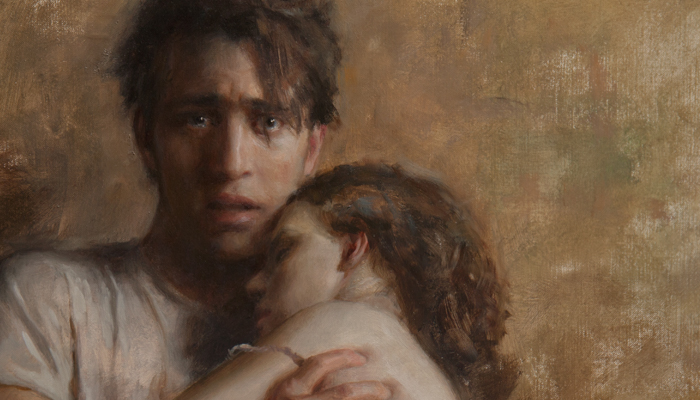 We asked Tom Maley, a long-standing user of audio description, to write for us about audio-described opera.

Opera is the summation of all the arts.  Anyone can get something out of an opera and for a few people it can be the most perfect and whole artistic voyage imaginable. In other words, opera is not just listening to a dozen or two hit singles from somewhere in the middle of the 19th century. If that’s what you want, you can stay at home and turn on the CD player. I knew a girl once who couldn’t hear a musical note.  But she went to all Opera North’s productions. Her boyfriend was the lighting manager and she too was expert in that department. Many people go to opera because they love the stage and they will talk endlessly about nuances of production, costume and staging almost to the exclusion of the music. There is also the celebrity angle: no other musical pursuit is so well endowed with celebrity and that is often what fills the house, above the appeal of music or theatrical prowess.

In Alan Bennett’s play The Habit of Art, about the relationship between the poet W.H. Auden and Benjamin Britten, an opera composer, Auden, getting impatient with Britten, shouts ‘nobody wants to know what they are singing: the libretto is only there to tell the actors how to do it’. However true that may be, it makes you wonder how people really understand opera when it is so hard to hear the words, or they are in a foreign language. The answer is that they have surtitles and, for blind patrons, there is audio description. I think it would be useful to hear the surtitles and it follows, I suppose, that I do not regard the singing as uninterruptible if it means making better sense of the experience. If I want to hear the singing without interruption I can do that at home in my own sitting room.

My first eye-opening experience of audio description in opera was a production of Rigoletto by Opera North about 15 years ago. The scene in Act I when Gilda, Rigoletto’s daughter, is abducted by the lascivious duke, is accompanied by gloriously triumphal music. I had never realised before that Verdi’s intention was to create the irony of the triumphant seduction. Just a few words in my ear from the describer brought the scene to life. It only takes a word or two in your ear to clarify what can be a very confusing presentation. In a stage play there are the voices and movements of the characters which, once learned, provide you with a guide to plot and innuendo. You can hear when they are looking at one another or looking at the audience and you can hear them move around on the stage. You can hear them enter and exit. In an opera it is rarely as simple as that. It is not even easy to tell one soprano from another and while the romantic tenor is invariably the lead part, a butler or a groom could also be a tenor and send you down a rabbit hole.

In a hilarious production of the Merry Widow, Opera North’s stage manager – always a splendid resource on touch tours – let me feel the legs of five tall statues of naked girls which presided over the set from the start of the production. She wouldn’t tell me what the message was before its relevance was laid bare in the performance. When the action moves to Maxim’s, the famous night club, the cast suddenly notice the statuesque females and start to dance with them. I was in on the joke and laughed all through the famous dance music with the rest.

Another startling revelation on a touch tour was the petite Fleur Wyn, in Mozart’s Die Zauberflöte  (The Magic Flute), who was to play Papagena. Before the show she came to meet us in her amazing dress which was made entirely of feathers, being for a bird girl, of course: that was an enduring experience. It didn’t affect her singing. But it stimulated my imagination.

With great sincerity we praise the brilliance of the singing especially by the leading parts, or the wit of a character part in Cosi fan tutti or Der Rosenkavalier. But invariably what people like to talk about after an opera is the production: Should Carmen have been moved to a car factory in Detroit in the ‘30s?  What is the point of bring Bellini’s Norma into the contemporary world? The only way to understand these controversies, which can be illuminating, is to walk round the set before the show with someone who knows the theatrical tricks and who can explain why they have gone to such lengths to position the action in an unfamiliar imaginary world. You can feel costumes and get a sense of the distances involved in the movement around the stage which is often obscured by the sound of the music. Keeping afloat and making the most of a live theatre experience can be a challenging undertaking for a blind opera-goer and the backup of the audio describers, who are invariably experienced theatregoers and highly knowledgeable, is significant.

In a famously imaginative Tosca which we saw in Nottingham, the heroine did not jump from the ramparts and her lover was already dead by the end of Act II. The whole of Act III was a ghostly reflection on the events of Act II and not a denouement as is usual. My wife and her friends had not grasped the point. while I, the proud recipient of the wisdom of the describers (who are always in on such matters) had to explain it to them. Such a shocking inversion of roles will always happen once in a lifetime of opera going. I tell the tale only to show how audio description helps you to be part of the audience and not left out. Being left out is what used to happen before the days of AD when a blind person would go to the theatre and spend the journey home asking people to explain what had really happened.  And I’ll never forget what an error it was to go to Shakespeare’s Comedy of Errors before audio description was invented.

Looking back over the last 20 years of opera with AD, I sometimes cannot remember if a particularly enjoyable opera production was actually described or not. This is a compliment to the describers who make such a subtly refined job of it. If there is no AD, I am fortunate to be able to follow an opera with a braille libretto, and braille words are very easy to obtain now from the internet. You don’t have to wait years for an RNIB edition to catch up. I think it would be a good thing if we had the surtitles read out to make sure that we are not losing the place. And I do not regard the music as sacrosanct: that is,I don’t come to an opera to hear the music alone. I come for a shared experience and I come to be surprised.

I hope to be surprised one day before I hang up my opera glasses to be invited to a fully audio-described production at the Royal Opera House. If it never happens we shall have to arrange regular coach outings to Nottingham and Birmingham where there is true enlightenment in arts for the visually-impaired. With the notable exception of Opera Holland Park – who are providing an audio-described performance of their production of La Traviata on 17 June – when will the capital catch on?