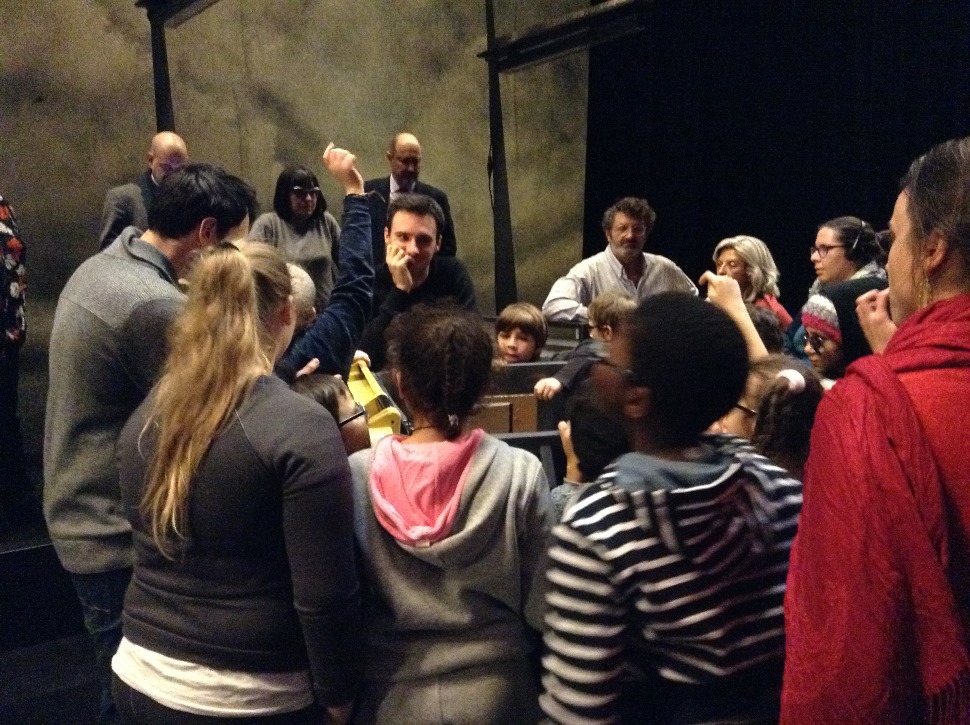 Earlier this month, Vocaleyes were invited to send a representative on a Theatres 4 All study tour organized by on of the project partners, the French company Accès Culture. It was a great opportunity to learn about the audio description offered by Parisian theatres of different scales and purpose. VocalEyes audio describer Eleanor Margolies joined the tour, together with representatives from the other European partners (from Emilia Romagna in northern Italy, Extremadura in western Spain and the University of Wolverhampton) and wrote about what she learnt.

Accès Culture works with around 80 theatres and opera houses across France, providing sign language, captioning and audio description. Founded in 1990, it employs five describers, six ‘regisseurs’ (technicians/stage managers) and six office staff. In 2015, they audio described about 152 shows across France, with 1,920 people making use of the service. In general, the number of described shows offered in Paris is lower than in London. For example, while the National Theatre, Royal Court and Young Vic typically offer at least one description for every main house show, in venues of similar standing such as the Théâtre national de Chaillot or la Colline only about a third of the shows are described.

While Accès Culture’s overall approach is similar to that found in Britain, their audio description is always recorded (although this is by no means the rule in France). We spent some time discussing the pros and cons of the two approaches. For Accès Culture, the primary benefit of recording is reliability and sound quality. The description and show relay outputs are mixed live in order to reduce the need for audience members to adjust the volume on their headsets during the show. The company primarily describes text-based drama, and even when describing dance and opera they choose not to exploit the dramatic potential of the describer’s voice.

A single describer writes the script, and it is recorded by the describer and office staff in a tiny sound booth in the Accès Culture office. They don’t watch a video of the show while recording, instead aiming for a ‘neutral’ tone. In opera, each of the vocal parts is associated with a different recorded voice. Each utterance is recorded as a separate cue and as many as 1,000 cues are needed for an opera, since this includes the voicing of the libretto.

At the theatre, a specially trained regisseur follows a marked up script or score to cue the recorded description, using a laptop-based software system that resembles captioning software. It displays the text of the upcoming cue in a box to the left of the screen, with the play script scrolling down on the right. A mic is available in case of unexpected events.

Recorded introductions are played on a loop in the auditorium before the show but are not sent out or hosted on the Accès Culture website. The regisseur brings braille and large print programmes to the theatre, along with a radio kit (if the theatre does not have its own). Touch tours are run by theatre staff, not the describer, which I believe is a missed opportunity to co-ordinate the vocabulary of the touch tour and in-show description.

We were also introduced to the audio description service at La Colline, a national theatre mainly dedicated to new writing. Quentin Robert works part-time in the PR department and part-time as the access officer. He produces and delivers all the audio description, working alone. Here, the description is always live. Quentin feels that audiences are not  engaged by a recording in the same way as by a live voice. Moreover, ‘every performance is a different show’. He mentioned Seuls, a recent piece written and performed by the theatre’s new artistic director Wajdi Mouawad. At every performance, as well as making changes in rhythm and phrasing, Mouawad spontaneously rearranged the sequence of the text, requiring quick adaptations to be made by the describer. Audio introductions are available on the theatre’s site, for example, here you can download the introduction for The Cherry Orchard.

Recording a description opens up the possibility of offering AD for every performance in a show’s run. However, it still requires a trained person working solely on this task: a sound or lighting technician would not be able to manage it alongside other duties. The only financial saving might lie in reduced travel/accommodation costs  of a freelancer if a company provides its own AD technician.

Setting aside questions of ‘liveness’ and technical quality, recorded description seems likely to work best with text-based drama in which action and delivery are fairly fixed. Could it cope with accidents and improvisations, street theatre and panto? At the time of writing, the New Wolsey Theatre in Ipswich is offering a recorded description for its panto Sinbad, allowing blind and partially sighted audience members to walk up to any performance they like.

Recording is clearly an option to consider in the repertoire of possible approaches. These include: the omniscient narrator of ‘traditional’ AD; the improvising, more ‘first person’ describer of outdoor performance; individual usher-guides (as in Punchdrunk’s Masque of the Red Death); a lurking observer who mutters into a mic (actor-describer Amanda Wright as the Policeman in the Ramps on the Moon production of The Government Inspector); contradictory, character-inflected description provided by members of an ensemble (as in Chloe Phillips’ research project The Importance of Being Described… Earnestly?); self-description and crowd-sourced description (Amelia Cavallo in Graeae’s burlesque piece Sheer). The list goes on…

At the Théâtre Des Champs-Elysées, we heard about an innovative project to provide audio description of opera for young people. In the first year, this was L’Enfant et les Sortileges by Ravel. The programme included familiarization visits and workshops, and a teaching pack for schools with samples of the music. The audio description was offered on the day of a ‘family’ performance of the opera.

The Théâtre et Cinéma Jacques Prévert, just outside Paris in Aulnay-sous-Bois, demonstrates an impressive commitment to access. They offer a free shuttle service for blind and partially-sighted theatre-goers, from home or the railway station, and aim to increase personalization and autonomy by linking audience members with volunteers who can provide transport.

It is traditional for French theatres to hold an annual event to present information about the forthcoming year’s shows to the press and season ticket holders. In Paris, blind and partially-sighted theatre-goers are invited to an annual presentation including directors, designers and actors from some 15-20 theatres. In the regions, similar events also include libraries and museums.