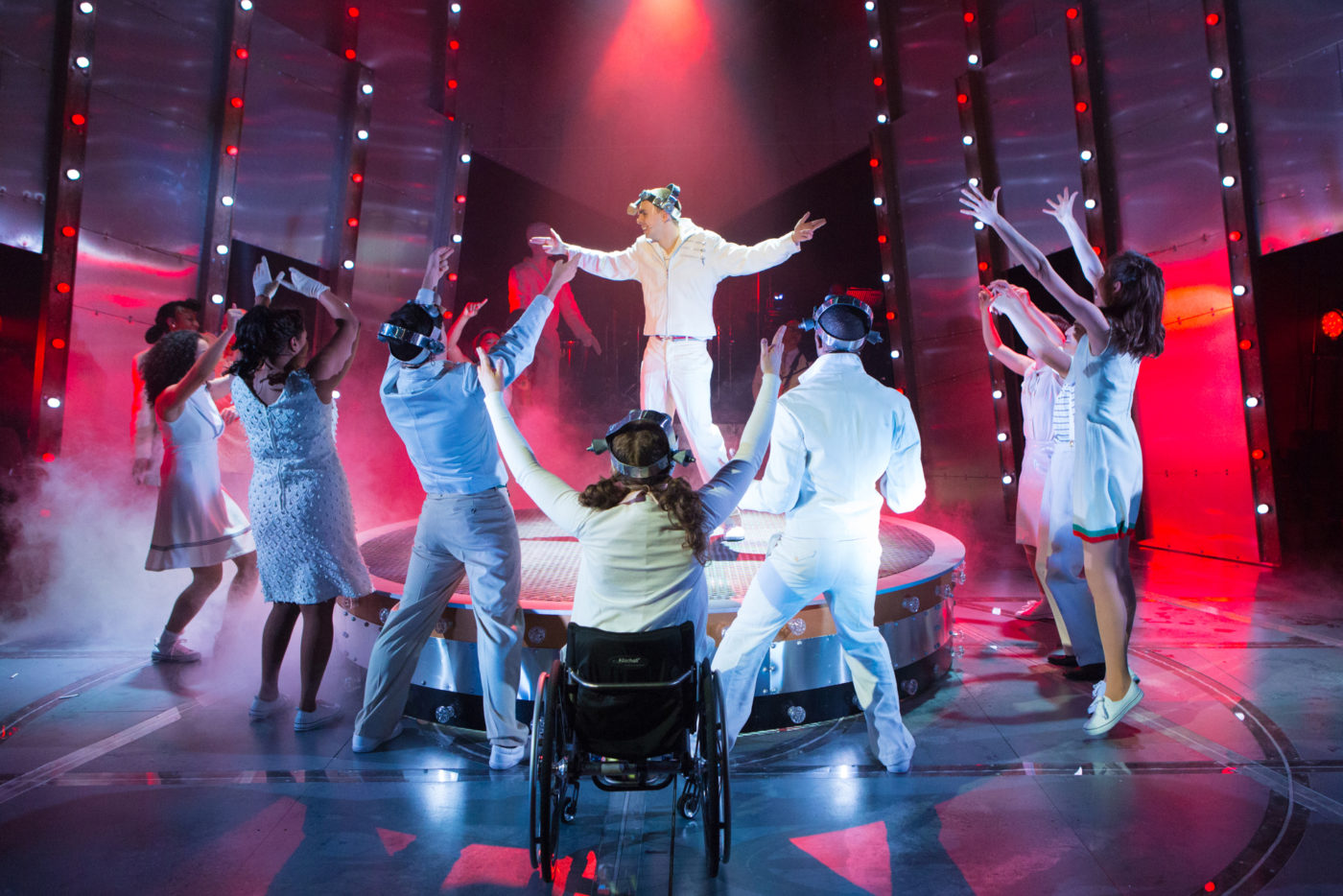 Now in its second year, Ramps on the Moon – an Arts Council England funded Strategic Touring project – continues to grow in mission and ambition. This consortium of six theatres, working with Graeae as a strategic partner, began their work to embed D/deaf and disabled performers and artists with the first production The Government Inspector, produced by consortium member Birmingham Repertory Theatre in 2016. Read our interview with Amanda Wright, about audio-describing this production from the stage. The consortium also includes Nottingham Playhouse, West Yorkshire Playhouse, Theatre Royal Stratford East and Sheffield Theatres. The second production, The Who’s Tommy, is currently on tour, produced by the New Wolsey Theatre.

We invited Paul Sirett, dramaturg for The Who’s Tommy, to write about their approach to describing the production.

Our initial ambition for embedding audio description (AD) creatively in Tommy was to create a show that could be accessed by audiences who are blind or partially sighted, without using headphones. Why? Because in conversations with regular AD users we learned that headphones can sometimes be alienating and that they can also distance audience members from the show. So, we set ourselves the challenge of making Tommy accessible without in-ear AD. We failed. We tried. But we failed.

In truth, failure is harsh word to use, compromise might be more appropriate. Tommy is a very difficult show to approach from a headphones-free AD perspective, indicative of which is the opening stage direction of the show:

SLIDE: 1940. During the overture the following series of vignettes unfolds in a kind of balletic ‘dumbshow’.

Basically, the opening minutes of the show tell the story of Tommy’s Mum and Dad – their whirlwind romance, their marriage, and Tommy’s Dad going off to war. All without a word of dialogue. The only information for a blind or partially sighted audience member is the music and the occasional sound effect such as a bomb dropping. In terms of narrative the result would be totally bewildering. Undaunted, we resolved to solve this problem by situating snatches of dialogue between the characters on stage in order to help locate the various “vignettes”. With the appropriate sound effects this seemed to work well and we felt encouraged to continue.

Unfortunately for us, Tommy is a show that is built around the songs and the visuals with a distinct lack of dialogue throughout. As a consequence, we found ourselves adding more and more dialogue. Pete Townshend was incredibly generous in his support of our work but the extra dialogue was starting to feel like an imposition and was also creating an extra burden for British Sign Language interpretation and captioning as we all tried to keep up with the multitude of changes.

Despite this, we persevered. However, by the end of the second week of rehearsals, when we reached the tense, unspoken denouement of the show – we knew the game was up. To have inserted expositional dialogue at this moment would not only have been inappropriate, it would have killed the emotion of the moment. We just couldn’t do it.

So, we moved to Plan B. The idea of Plan B was to balance the already created on-stage AD dialogue with a more traditional in-ear AD through headphones. It was a compromise, but at least we succeeded in keeping the in-ear AD to a minimum by balancing it with exposition within the newly created dialogue.

Ultimately, we were disappointed that we didn’t achieve our original goal. On reflection, I think the ambition was right, but this was the wrong show. Tommy is a musical and visual feast, the original authors made an aesthetic choice to use as little verbal exposition as possible and it was too much to try to impose too much of this on the show. However, we are very proud of the result of our work and the way we were able to try something new by balancing specially written, live, on-stage AD with an in-ear commentary that (hopefully) offers something of the best of both worlds.

We continue to learn.