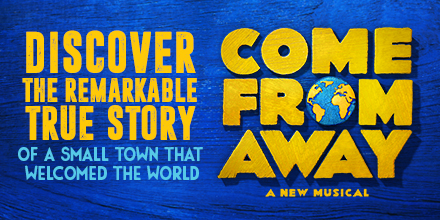 The critically acclaimed musical ​Come From Away​, the moving tale that captured the spirit of true events that transpired in the wake of 9/11.

Winning four Olivier Awards, including Best New Musical, Come From Away has swept the West End being praised with a wave of five star reviews from both critics and the public alike.

Come From Away ​tells the story of what happened to a small town called Gander, Newfoundland and Labrador during the events of September 11, 2001, when 38 planes had to unexpectedly land. The small community had to rally together throughout the struggle and accommodate nearly 7,000 passengers following the tragedy of 9/11. Many of the characters are based upon real-life passengers, including Nick and Diane Marson, a Brit and an American who fell in love in real life following the disaster.

Event image: The words Come From Away on a blue background, the O is replaced with a picture of the earth. Beside it reads: discover the remarkable true story of a small town that welcomed the world.