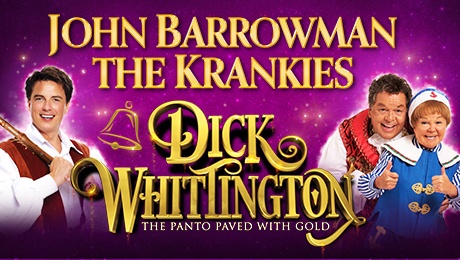 This year the Manchester Opera House will journey to London this festive season in the magical pantomime adventure Dick Whittington. John Barrowman and The Krankies will lead the cast in the magical production which runs from Saturday 9 December – Sunday 7 January.

John Barrowman (Doctor Who, Torchwood, Arrow) stars in the title role of the hero Dick Whittington. The hugely popular showman has enjoyed an acclaimed and hugely varied career including music, presenting and writing with performances on television and film, in the West End and on Broadway.

Joining John are the legendary double act The Krankies playing Councillor and Jimmy Krankie. Having entertained audiences with their slapstick for over 50 years, Dick Whittington will mark the couple’s seventh pantomime season playing alongside John Barrowman.

Produced by Qdos Entertainment, the world’s biggest pantomime producer, join our hero Dick Whittington (and his faithful feline pal) as he seeks fame, fortune and happiness to become Lord Mayor of London. Guided by the magical Fairy Bow Bells on an adventure that sends him from London town to the High Seas headed for Morocco. Don’t miss the action-packed pantomime full of laughter, music and dance!