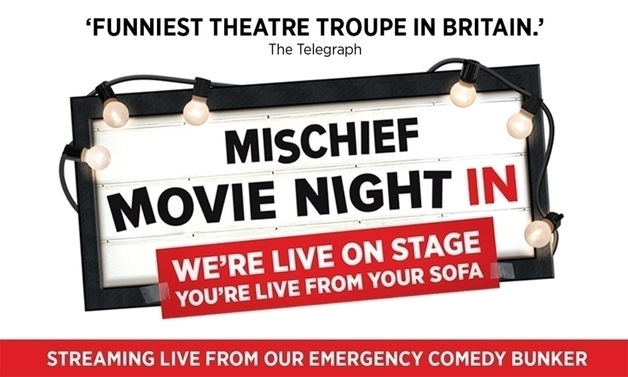 We’re Live On Stage. You’re Live From Your Sofa

Having successfully streamed 6 shows in December and 9 in January, the original Mischief Team are launching another 10 for February, including a Valentine’s Day Rom-Com and a Sequel Sunday!

In their final appearance, ahead of filming a new TV series, the Mischief team are returning to their emergency comedy bunker to stream a final run of movies to keep audiences entertained at home, until it’s safe to go back into theatres. So book now, then sit back, relax and enjoy a brand-new movie, brought to life before your very eyes.

The final show on 21 February will be audio described. This will also include a virtual touch tour at 7.30pm, where they will also be asking for your suggestions of themes for the movie, which starts at 8pm. You can post your suggestions on social media using the hashtag #MischiefMovieNightIn.

They will still need YOU to come up with the title, the genre and location of this improvised movie. Help them make their movie!

Performance times are in GMT

To get your tickets, visit Mischief website or email [email protected]

If during the night of the event you have any tech problems, please visit Mischief troubleshooting page, contact [email protected] or call 02074371736.