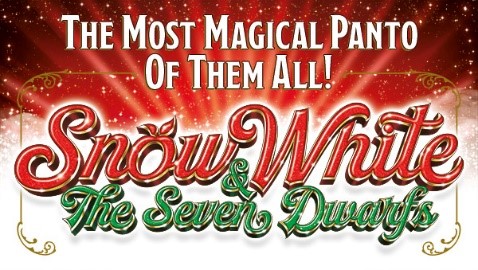 Join a magical pantomime adventure deep into the enchanted forest for Christmas 2021, with a beautiful princess, a jealous Wicked Queen, seven bumbling dwarfs, a naughty nurse, a hilarious jester and not forgetting a poisoned apple and a Magic Mirror.

TV legend and national treasure, Su Pollard, is set to stir up a storm in Sunderland this Christmas as the dastardly Wicked Queen, in Snow White & the Seven Dwarfs.

With the North East Queen of comedy, Miss Rory (Boulevard, aka Dan Cunningham) as the hilarious Nurse Rorina and say ‘Alreet’ to South Shields comic Tom Whalley, as the side-splitting Muddles the Jester in the canniest panto of them all.

Event image: On a red background with snowflakes illuminated by rays of light, are the words Snow White & The Seven Dwarfs. The o in Snow White is the shape of a red apple.  Above it reads, The Most Magical Panto of Them All!