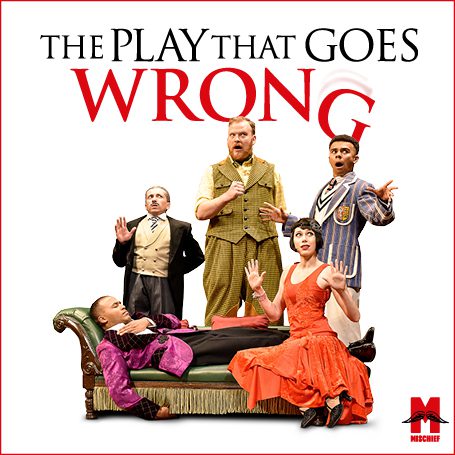 You all know the classic whodunnit story, there has been a murder at a country manor and an inspector is set on the case to find who the culprit is. However, when this plot is given to the accident-prone thespians, The Cornley Polytechnic Drama Society, everything that can go wrong… does!

The actors and crew battle against all odds to make it through to their final curtain call, with hilarious consequences!

Do you ever find out who murdered Charles Haversham? You’ll have to see for yourself!

Now blundering through its seventh catastrophic year at London’s Duchess Theatre, THE PLAY THAT GOES WRONG is guaranteed to leave you aching with laughter!

Unfortunately it is not possible to provide a touch tour alongside this audio described performance.

Event image: The title reads The Play That Goes Wrong – although the G is already falling off. A man in a smoking jacket lies on a chaise lounge, eyes closed. Beside him four characters is 1920’s costumes act alarmed. A flapper girl holds up both hands in surprise, a boy in a striped blazer is aghast, a man in tweeds brandishes his fist and another in tails looks confused.