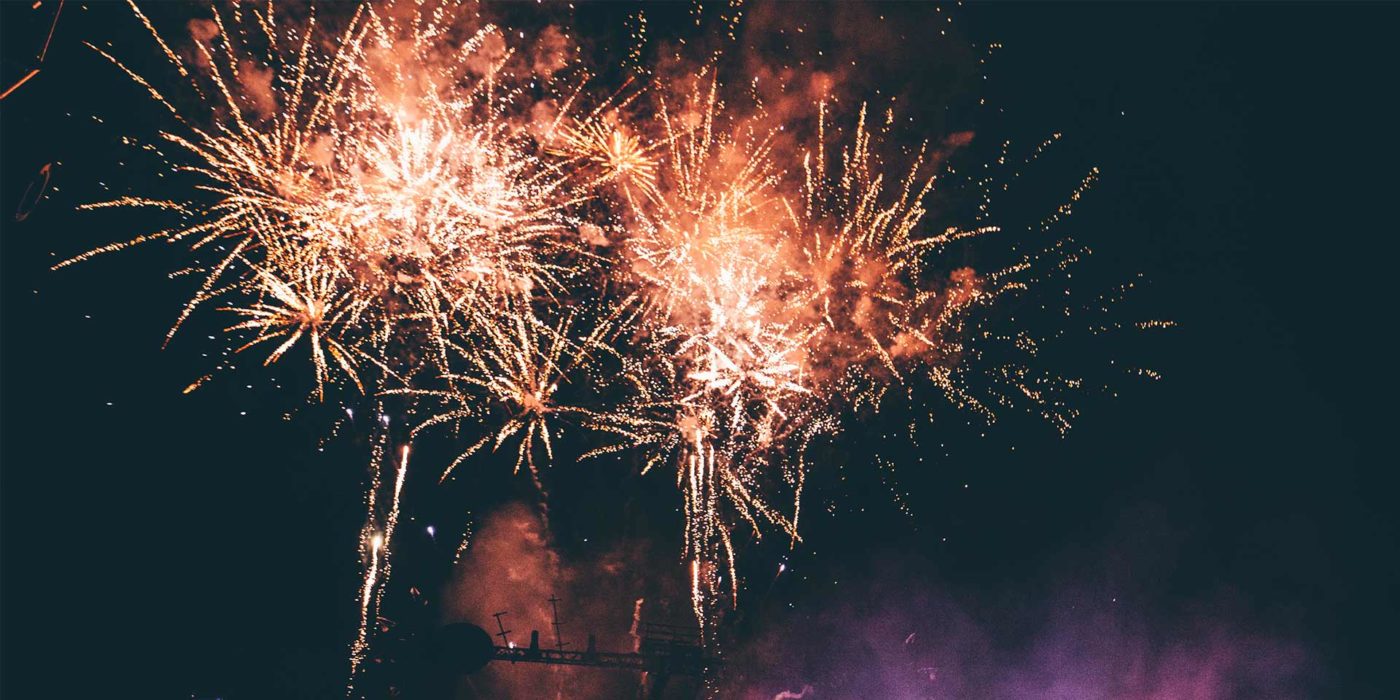 When my brother and I were little, we used to play a game called ‘fireworks’. We would imagine the fireworks shooting up into the sky and react vocally to the imagined patterns and shapes they made, with long, drawn-out ‘oooohhh’s and ‘aaaahhh’s. We would sometimes point a finger to follow the trajectory of the imagined firework, and always the last line, after its light had died, was ‘aah, chuck it away’! Those halcyon pre-digital days!  We’d only just got a colour TV!

It was a privilege and challenge to be asked by VocalEyes to audio describe the fireworks and accompanying film for In With a Bang, which launched Hull’s reign as City of Culture 2017. My listeners would be very much in the dark on that chilly evening of Sunday 1 January. How could I bring alive for them the ephemeral magic of sparks dancing through the night air?

As with so many areas of descriptive work, the way in which we audio describe one genre of activity feeds into others. Thus the approach, without really thinking about it, was informed by past descriptions of dance, film and the visual arts. Particularly with dance and the visual arts, there is no dialogue to work around, and so the words we use, the rhythms of our speech, our tone and delivery take on an even greater significance.

Fellow describer Roz sent me an interesting link to a video made by the Canadian organisation VocalEye, about Fingerworks, where there is discussion around, and a demonstration of, describing fireworks, on a one-to-one basis, in more of a tactile way, but this wasn’t going to work for the large group we were expecting.

As with all description, the challenge was how to translate the visual into the verbal: in this case, giving a sense of the drama, the energy, the intensity, the colour, the patterns, the velocity, the movement, the pace, even the emotion of the spectacle.

I was provided with a computer simulation of ‘In With a Bang’, which was exceedingly helpful, in being able to script and learn the sequence and choreography of the display. I knew when to expect a sudden rush of movement upwards, or showers downwards, when the colours would flood red or blue, whether the focus was high or low and so on. However, of course this didn’t really do justice to the event on the night. The smoke from the fireworks meant that what had been a clear picture of the lower display, was in reality less distinct; the effect of the reflections on the river added a new dimension; the timings, patterns and shapes weren’t quite as they had been on screen. This meant that I used a combination of scripted and improvised material, but, as ever, it was very helpful to have the improvisation informed by knowledge of what to expect.

As with dance (how many times can you use the word spin, for example?) repetition is part of any firework sequence. I tried to use the repetitions creatively,  and match the delivery to the events as they happened. I used more emotion in my voice than I would for a standard theatre event, which has other auditory clues, to convey the difference for example, between the moments when the sky was lit up with explosions coming thick and fast, and those when a delicate shower of sparks came trickling, almost fluttering down.

There was a film with music playing throughout the display and I decided against describing that at the same time, as I am sure that the sighted audience would focus on the sky rather than the screen. I described the film before the start of the display, and included the description of the film also in the recorded materialdistributed to bookers beforehand.

I was superbly aided, on the technical support side, by Nigel Burke. We set up camp in a small tent near the priority viewing area, where all the headsets were charged and ready for use.  I used a headset mic, which gave me free reign to move around as needed.

I had some lovely feedback:

‘Thank you also for what was in my opinion a fabulously colourful audio description delivered by the lady from the tent, she really enriched the experience just needed a bit more volume on the headset to overcome the speakers at the location but that’s a minor flaw in what was a fabulous evening that we both thoroughly enjoyed.’

You can read a sample below  of my initial script that I worked from. I did refrain from ‘oohs’ and ‘aahs’ and didn’t even say ‘chuck it away’ at the end. However, it’s fair to say that the fun, enjoyment and excitement of my childhood game from so many years ago, contributed to that which I tried to convey to the listeners on that first night of City of Culture for Hull 2017. We launched it with a bang!

BLUE balls up above explode into cartwheels with spokes of light

GREEN and purple explosions above, looking like some strange solar system

RED BALLS with blue planetary rings around them

Beads of colour rise up from below like a praying mantis

Rays catapult up from below tracing golden paths through the darkness

Up from below.  Exploding above

Sparks tumble down like frozen water in a fountain

Triumphant blue and gold star-busts above

Flames of gold below

White stars shoot out rays in all directions

Clusters of gold above and below

Their golden seeds fire out in all directions

Red rays below.  Above sparks explode like a flock of birds taking off in different directions

Trajectories through the darkness

Spheres of jewel colours high above

Wave of golden flame below…