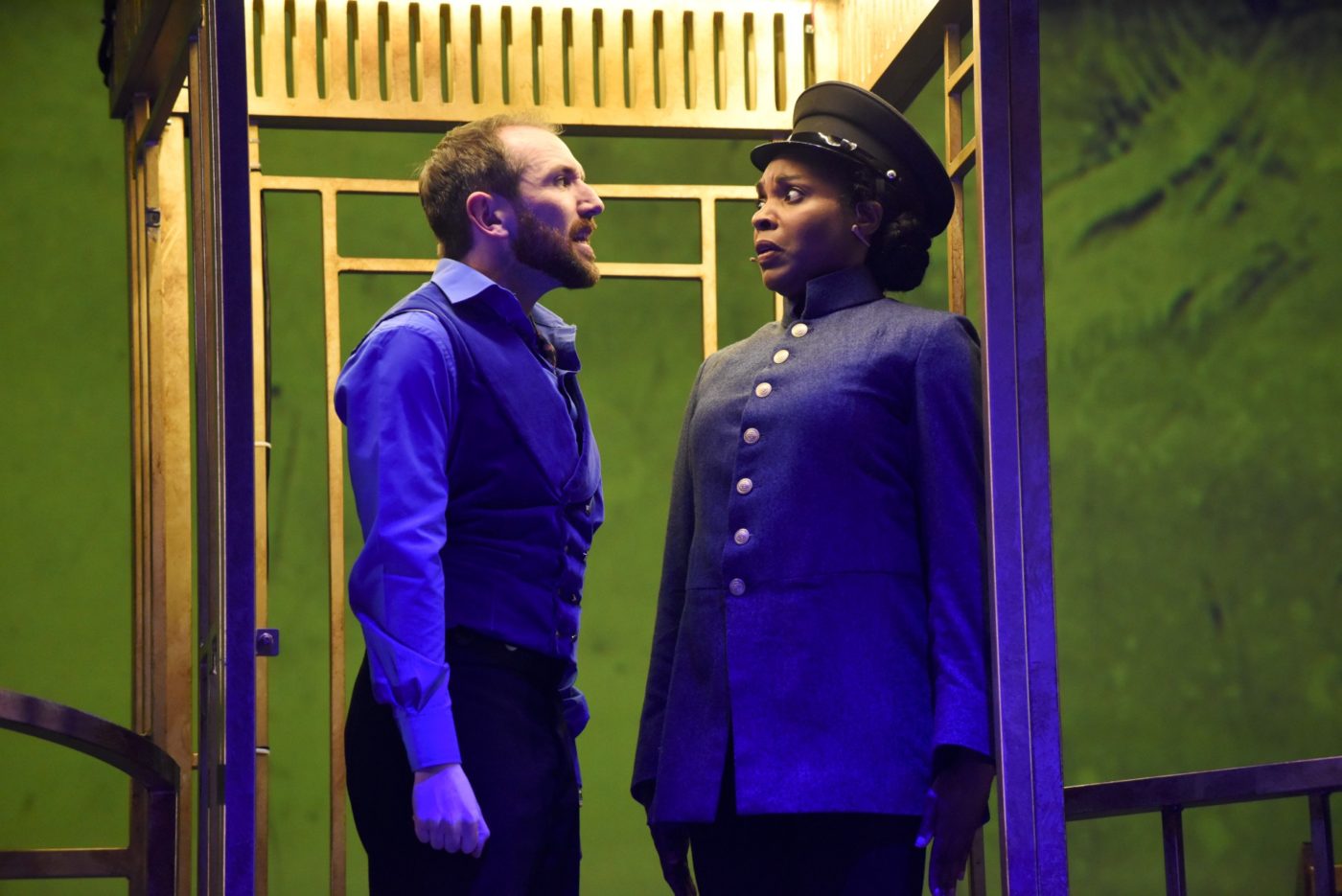 Amanda Wright is a cast member and audio describer for Birmingham Rep’s tour of The Government Inspector, supported by Ramps on the Moon, an initiative to integrate disabled and non- disabled performers and practitioners, as well as building access into each performance. Our Chief Executive, Matthew Cock, went to see the show at Theatre Royal, Stratford East. Afterwards, he interviewed Amanda by email, as she was on the last leg of the tour at Sheffield’s Crucible Theatre (which finished on Saturday 25th June 2016).

AW: I graduated from the BA Acting course at Royal Central School of Speech & Drama in 2003, however, I have been acting since I was 5 years old. The first two years after graduating from drama school were really tough but I was determined to stick it out. In order to do so, I thought it was important to find a part time job that was creative, flexible and linked to theatre in some way.

I’d never heard of audio description until I saw an advert looking for describers for Soho Theatre. They were offering to pay for the training of three describers in exchange for discounted descriptions at the theatre for a certain period of time. My brother is partially deaf, so I’ve always been passionate about making the arts accessible, and it ticked all my other boxes too. The audition consisted of some sight-reading (so they could assess our voices), improvising short scenes (to assess our creativity) and a homework task – writing and recording a description of an image given to us by the trainers. I auditioned successfully and was trained by Mary Plackett and Veronika Hyks. To this day Veronika remains a close friend and informal mentor. In 2005 I became a qualified Audio Description Association (ADA) Audio Describer.

MC: In The Government Inspector, you are a cast member and voice the show’s AD through a head mic from the stage. Have you done this dual role before?

AW: Yes, I play a Jamaican policewoman in the show and deliver my AD in character using the accent. This is the first time I have ever combined AD into my performance and it’s been a really exciting challenge. As far as I’m aware, this is the first time AD has been devised and performed in this way – with the describer as a speaking character in the play. I’ve previously delivered AD using a head mic and portable pack when describing for the Science Museum in London, but that was a thick, black headset with a very prominent mic. The head mic used for The Government Inspector is almost unnoticeable as it’s very slim and a nude tone. It becomes part of the character.

MC: It must be quite a challenge switching back and forward between the two roles.

AW: Yes, definitely! One of my favourite challenges is when, because of the available gap in the dialogue, I have to describe something seconds before it happens, then gasp along with the rest of the cast at the shocking revelation. This took a bit of getting used to, delivering the AD with a sense of shock and alarm in my voice, but not physically reacting until I’m back in character in sync with the rest of the cast.

MC: What was the process for scripting the AD for The Government Inspector? How different was that in your experience to ‘normal’ AD script development? How involved were the other actors and director in the process?

AW: Scripting the AD for The Government Inspector was very different from my previous AD work. Usually when I describe a show, I’m describing a finished product, with all the decisions made long before I get involved. This time, I was there from day one of rehearsals, when nothing had been set. The actors were still trying to figure out how they were going to play their characters; there were ideas for costumes but these changed as rehearsals developed; blocking for scenes changed regularly. It was completely up to me how I approached my work, so at first I focused on the character work for my Policewoman, the performer part of my ‘performer/describer’ role.

Then I began to work on the AD. The only thing that was a definite was the design of the set. So I started work on the introductory notes, using the set model to describe it. I decided to sit in on every rehearsal and make notes on characters. These changed as the actors performance developed, evolved and new choices were made but I adapted my notes accordingly.

Finally, I began making tentative notes in my script on the action in the scenes. These changed many, many times and continue to change as the actors experiment in performance. Once I had a framework for each scene, I started to learn the AD, something I’d never had to do before. I then layered in my character lines, my movements in the opening physical theatre piece and the scene change around the A.D. It was like learning choreography: ‘I move this chair; I say this line of AD; I open the door and say that line of AD…’ etc.

Roxana (Silbert, the show’s director) had a lot of faith in me and was happy for me to email drafts of my AD introductory notes as and when I felt the need to update her. Once I had a rough draft of the AD for scenes, the assistant director, Milli Bhatia, was assigned to listen in to my AD during rehearsals. It was useful to have that critical ear, as she had to point out that I was forgetting to describe my own actions as the policewoman! I thought it would be fun and useful for the listener if we included the actors’ voices during their character descriptions. I organised recording of these character clips and gave the actors suggestions to improvise around.

MC: It’s a very physical, fast (and funny) play, and the BSL is very prominent, and the signing and captioning are even the subject of comedy at one point.  Was it ever considered making the AD audible to everyone, and less ‘invisible’?

AW: Now that the show is up and running, I can see that there was definitely a missed opportunity for a gag involving the AD. The project is being evaluated and I’ve already pointed this out as something that could be introduced in the next ‘Ramps on the Moon’ project. This would be particularly useful as a way of introducing AD to a wider audience – so many people have approached me after a show to find out why I’m the only one with a head mic and why I mutter to myself throughout the show.

MC: Before the start of the show, as the audience found their seats, you delivered an introduction, describing the set and characters, all the time in character. Do you think this creative approach to audio description is the future? Do you think it will work for every production?

AW I think this creative approach is an exciting evolution of AD and I would love to see it used in more productions. The Government Inspector is a comedy and I played a role in the show, so it worked having my character give subjective descriptions during my introduction. This approach would definitely work for every production in which the Describer is part of the ‘world of the play’, a character interacting with the other characters. However, I’m intrigued to find out how the audience would respond to subjective descriptions delivered by a describer in-role as a character of their own choosing. Now that would be very interesting.

MC: Have you had much feedback from AD users?

AW: Feedback from visually impaired and blind patrons has been very positive. Audiences have enjoyed having the describer onstage as part of the action. Usually, we describe things from the audiences perspective, e.g. ‘The Mayor looks out at us’ but in The Government Inspector, I’ve been part of the world, so I say things like ‘The Mayor looks out at you’ this change of perspective makes a real difference to the AD.

MC: Thank you so much for your time, Amanda, and sharing your experience.