News»Juliette Parfitt on her first experience of audio-described theatre

I have a terrible confession – I’m a 26-year-old who has been visually impaired her whole life and I’ve never been to an audio-described performance… until the other week, that was.

My sister Elizabeth and I went to see Fiddler on the Roof at the Playhouse Theatre in London on Wednesday 15 May. I also attended my very first touch tour before the show. Although I had some idea of what it entailed, I was very excited to experience one.

When we arrived, we were greeted in the foyer by the two describers from VocalEyes, who explained how the touch tour would work. After this, we went through the auditorium and onto the stage.

The describers gave us a lovely detailed description of the scenery, including where the entrances and exits were for the performers and where the band would be, as well as what the outlines of the houses and lighting looked like. There were also lots of props described to us, including a well with a pump that worked, the splashing sound surprised quite a few of us!

Many members of the cast were on the stage in costume, they introduced themselves and described what they were wearing. The male characters were particularly interesting, many of them were wearing a Jewish prayer shawl with lots of tassels and detailing. Quite a few of them were also sporting impressive beards, which they were kind enough to let us feel!

After this we were set loose to wander around and fulfil more of the touching part of the tour. I have a lot of usable vision and so didn’t find a need to touch objects and scenery so much, but I found getting to walk around on stage and have a really close look at props that I might not see properly from my seat during the musical incredibly useful. I particularly enjoyed the rubber eggs on Tevye’s cart and the scarily realistic looking bucket of offal that belonged to the butcher. 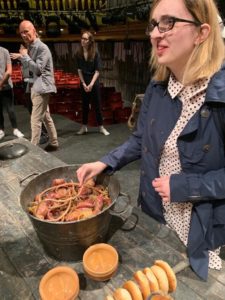 Image: Juliette gets to grips with a bucket of fake offal on the touch tour.

After the tour the cast left the stage to go and prepare for the show. My sister and I prepared for the show by having a sandwich in the park!

Before taking our seats, I picked up my headset. It was given to me already set up and the usher explained how to change the volume if needed, but apart from that it was all ready to go. This was very lucky as I am no tech wiz. I also got my show notes in braille and had a read of them once we got to our seats. This was when I discovered that the lady playing Golde was the singing voice of Pocahontas!

While people were taking their seats, one of the describers went going through the scenery and lighting on stage over the headset. I thought this was great for anyone who had been unable to make the touch tour. The describer also told us a bit about what each character would be wearing and a little bit about them, it felt almost like a cool bonus feature just for us.

When the show began, I quickly realised how useful it was to have heard the voices of many of the cast members, it made it very easy to tell who was speaking. Although I should say that the describer also said who was speaking or singing throughout the show, making it easy to follow.

Often with shows once you’ve learned the different voices it’s quite easy to keep up with the dialogue, but in Fiddler on the Roof there are many musical numbers with a lot of dancing.

This is where the audio description was invaluable. We were told where the main characters were, what they were doing and given detailed description of the kinds of dancing that was going on. Often, I could see when someone had come on or off stage, but I couldn’t always tell who, so having that information was great and made me feel able to keep up with the performance just as much as sighted audience members.

All this has given me an appreciation for the skill involved in describing, how hard it must be to fit the description in in a natural way that didn’t overlap with the dialogue or ruin the flow of the performance.

Having never used audio description before I’d had no idea at all what it would be like and I was really surprised at how well it fitted in, after a while I didn’t think of it as something separate from the show. The only slight negative was that the headset was pretty uncomfortable in my ears, after a while I found myself swapping it from one ear to another.

Fiddler on the Roof is a great musical, the story is gripping and thought provoking and the tunes are so catchy that I haven’t been able to get them out of my head since! I would thoroughly recommend seeing it.

Don’t miss the next chance to see Fiddler on the Roof audio described on Monday 9 September at the Playhouse Theatre, London.

Discover upcoming audio-described performances in theatres around the UK on the VocalEyes wesbsite.