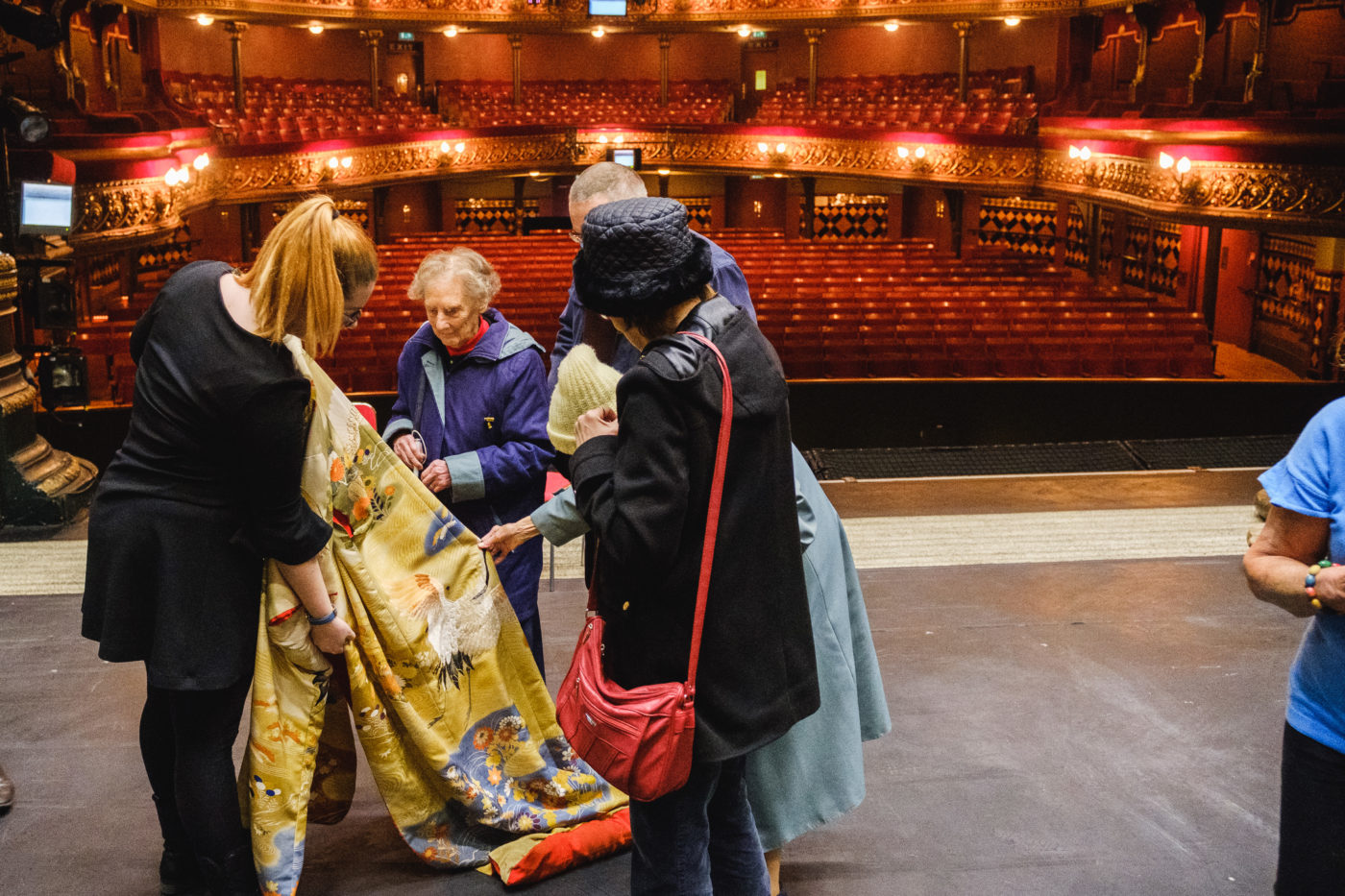 Alice Gilmour, Community Partnerships and Access Officer for Opera North, tells us about the challenges and benefits of recorded audio description.

Making opera accessible is my role at Opera North and I am always looking to expand the range of services we offer our audiences. Audio described performances are programmed every year in Leeds and our touring theatres, but most concert halls do not have the technology to offer it. This has meant that our very well-received semi-staged performances of Turandot, Salome and more recently Aida, in concert halls throughout the UK have not been accessible to anyone who cannot see the displayed surtitles, as they have all been sung in their original languages.

In my work as an audio describer, I was particularly struck by someone’s lived experience. It was a conversation I had with Tom Maley, a passionate opera-lover who is blind, who always attends the audio described performances at Nottingham Theatre Royal. After The Magic Flute in March 2019, he told me he was looking forward to the upcoming production of Aida and asked what language it would be sung in. When I replied Italian, his face said it all.

Keeping it in sync

Through my work at Opera North and also as a freelance voice over artist and sound engineer with my own studio, I was aware that improvements in technology are helping to increase access to the arts all the time, one of the most exciting recent developments being The National Theatre’s new captioning glasses which send captions to a pair of glasses so that deaf theatre-goers can enjoy any performance. And they are working towards using the same technology to broadcast audio description too. But until that technology is ready and available, I had always thought that pre-recording the audio description could be a way of making every performance accessible.

I first researched the extent to which time deviations might negatively impact this method. A look at Opera North’s show reports for recent productions revealed that timings only deviated by a maximum of one to two minutes over each half of a performance. And with Aida, there was a pause in the first half between acts one and two, which meant I could divide the audio description into three audio files – two for the first half and one for the second – thus making it more likely that it would stay synchronised.

Other steps I took to mitigate potential syncing issues were that I would read sections of text a bit earlier than I might in a live situation, so that if the synchronisation was slightly out, I would not be talking over the first few notes of a well-known aria for instance. And given that the detail of the sets, costumes and characters was already described in the preshow audio notes, I just needed to summarise who was singing, where they were standing and what they were about to sing about. The extra time taken in the editing suite working to synchronise the audio with the DVD was crucial in getting these timings as well-placed as possible.

Once the recordings were finished, the users were emailed links to the three files, and some simple instructions for operation: these were to press pause after hearing me saying ‘Act one’, ‘Act two’ etc at the beginning of each file so they could be sure they had clicked on the right link. And then to press play again when they heard the first notes from the orchestra. The concert halls were contacted to inform them that that the trial was taking place and to share the Wi-Fi with users – they needed a reliable and free link. And front of house were also informed so that the users would not be asked to turn off their phones!

The feedback from Tom and his wife Caroline after the performance in Nottingham was fantastic – Tom said he could follow what was happening and could hear me clearly and easily using his own headphones. And the description seemed to stay more or less in sync to the end of each act. He summed it up:

“In this trial run it was quite obvious that using a phone with our own headsets and a reliable production assistant (Caroline) was much better than anything that we have had in any theatre anywhere in Europe. I could hear your voice clearly without impinging on the neighbours and everything ran as smoothly as one could hope for.”

Another customer trialling it in Leeds said,

“I would say it is one million times better than the old system. The sound was much clearer and it did not cut off if I or somebody nearby moved at all. I would imagine it would be impossible to get the timing 100% in sync, as it does depend on exactly when you press the play button, but it was very good. Personally, I liked the way you only said what was necessary to help understand what was happening, without interrupting the music.”

Also, her husband commented that he couldn’t hear any sound from her headphones – some theatre headsets allow the audio description to be overheard by audience members sitting nearby which is annoying for them and can be distressing for the user.

So the main improvements were sound quality, ease of use (in terms of not relying on theatre equipment) and lack of sound-bleed to nearby audience members. Even if audio description equipment is available in theatres, there can be a number of issues: inconvenience (e.g. the customer must collect a headset and hand it back in a theatre full of people all arriving and departing); reliability ( e.g. infra-red systems which are easily interrupted by movement of others); lower quality and comfort (most smartphone headphones provide a much higher sound quality and are more ergonomic).

Operational issues such as stopping and starting each audio file could be mitigated by using a system like Sennheiser’s MobileConnect which could broadcast the files and the user would listen via their phone using the app. Or for users who do not own a smartphone, they (or a helpful friend or family member) could download the audio files ahead of time and copy them onto an mp3 player with simple controls – you can buy these for as little as £12-£15. Theatres could even have some of these to lend out to customers on the night with the files already downloaded.

Clearly if a performance has to stop, there would be issues in restarting the audio at the correct point if operated by the user, which is one of the main reasons why live audio description is still the best option.

However, for productions that do not vary too much in timing, pre-recording audio description would be a great way of allowing blind and partially sighted customers to attend performances in spaces that don’t have the technology to broadcast it. And for venues that do have the technology, in addition to offering a live audio described performance and touch tour, the prepared script could be recorded and made freely available, thus allowing people to choose any performance, which I know for most users of accessible services, is the holy grail.

La bohème will be touring to Leeds, Newcastle, Nottingham and Salford this autumn.  Pre-recorded audio description will be available on Handel’s Giulio Cesare in the same venues.  Please contact [email protected] if you would be interested in trying it.