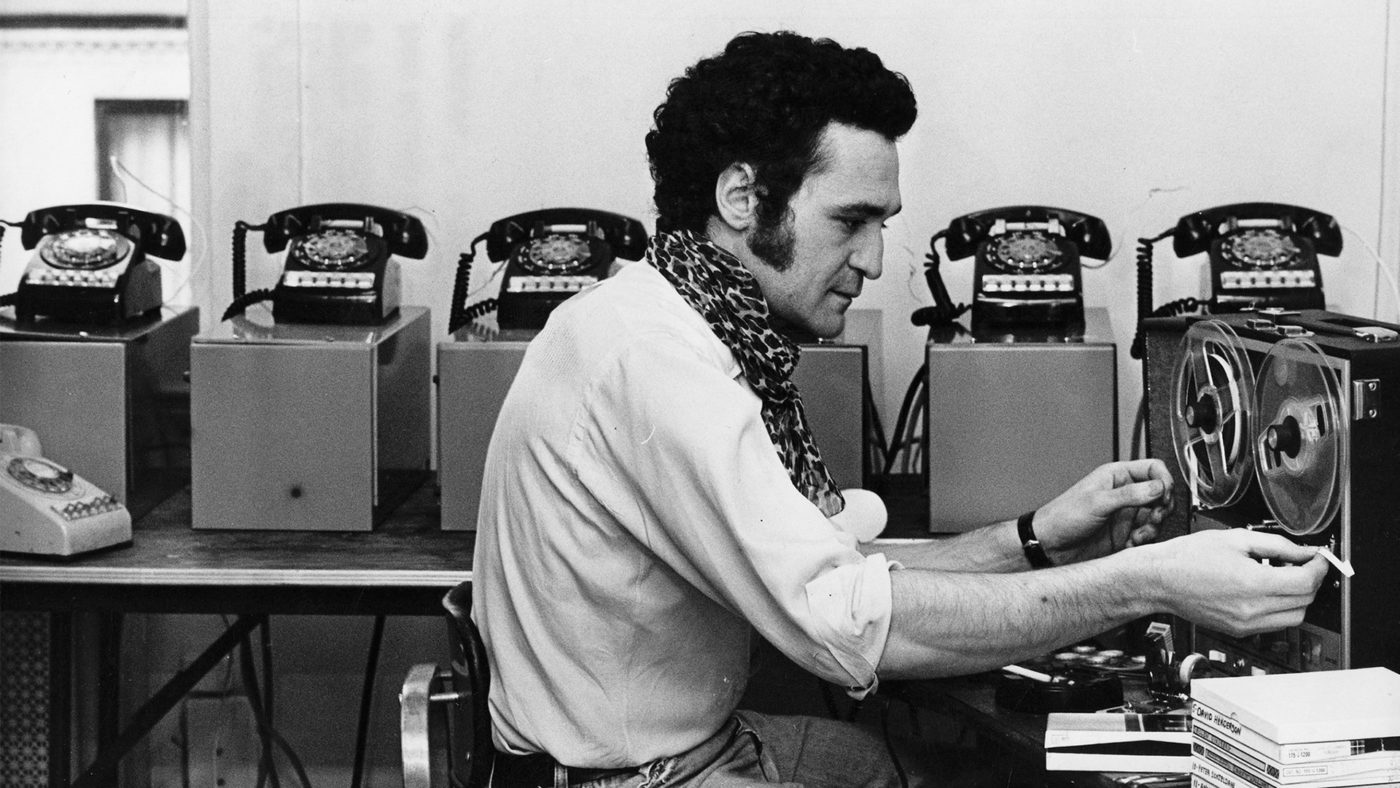 Welcome to The Interval, #24, your (mostly) weekly selection of audio-described or accessible culture online.

The third play in the Old Vic’s In Camera series is Faith Healer, Brian Friel’s classic exploration of the power of belief, first staged in 1979. It stars Michael Sheen as itinerant faith healer Frank Hardy, David Threlfall as his manager Teddy, and Indira Varma as his wife Grace. In four monologues, the trio convey their conflicting recollections as they individually attempt to make sense of Frank’s life.

Scratch performances will be streamed live from the Old Vic stage using Zoom. All will be audio described by the Old Vic’s regular describers Roz Chalmers and Alison Clarke.

Book for Faith Healer online, with tickets available on a ‘pay what you decide’ basis. Upcoming performances are:

The Protest is a series of six short video pieces released during lockdown by Black creators in the Bush Theatre’s writing community as a response to the killing of George Floyd, and its impact on Black Britons.

Five of the pieces have audio description, scripted by Di Langford and recorded by Koko Brown. The final piece has a visual description and transcript.

Matilda is a bionic playwright and screenwriter. Content warning: Contains themes of racism.

Your Work by Anoushka Lucas

Anoushka is a singer, songwriter, actress and composer. Content warning: Contains use of racial slurs and references to racial violence.

The Fire This Time by Kalungi Ssebandeke (ft Anoushka Lucas)

Kalungi is an actor, writer and musician. Content warning: Contains themes of racism and references to racist violence.

Do You Hear Us Now? by Benedict Lombe

Fehinti is an actor, theatre maker and an activist. Content warning: Contains use of racial slurs – The use of the N-word. The video is a screen-recording of text messages shared between two friends. Download a visual description of the piece followed by the transcript.

A visually descriptive journey across India, Nepal, Tibet, Japan and the UK from the comfort of your own home. VocalEyes describer Lonny Evans leads this audio-described event, which provides evocative visual descriptions of 10 key works from the Tantra enlightenment to revolution exhibition, alongside images of each object. Lonny will be joined by exhibition curator Imma Ramos to explore this radical South Asian philosophy from its birth in India to the present day.

Part of the public programme accompanying the special exhibition, Tantra: enlightenment to revolution (24 September 2020 – 24 January 2021). Book now to secure your place. If you have any access requirements or need assistance booking this event please email [email protected] or phone 020 7323 8971.

Join audio describer Eleanor Margolies for a discussion about three works by artist Julie Cockburn. Julie is renowned for re-imagining and re-configuring found objects and photographs into meticulously constructed, unique artworks. Having trained as a sculptor at London’s Central Saint Martins, she approaches each work as a three-dimensional form. She has exhibited extensively in the UK, Europe and the USA. Her work also resides in a range of public collections including the Wellcome Collection (UK) and the Yale Centre for British Art (USA).

The Beholder’s Share: a podcast mixtape about artists in SFMOMA’s collection

Although not accessible by design, in general, podcasts about visual art tend to do a reasonable job of describing the work, because the assumption is that the person listening is not standing in front of it.  Also, they are focused on the storytelling aspect. We’ve been recommended the following:

Connor by Everything Is Alive is about what it’s like to BE a painting.

Anselm Kiefer by The Lonely Palette, a more intense and in-depth episode about the paintings Margarethe (1981) and Sulamith (1983) by German artist Anselm Kiefer

If you’ve not heard 99% Invisible’s podcasts before, they are highly recommended. They are about all the thought that goes into the things we don’t think about — the unnoticed architecture and design that shape our world. With over 400 million downloads, 99% Invisible is one of the most popular podcasts on iTunes and is available on RadioPublic, via RSS and through other podcasting apps.

An extra gem from SFMOMA’s collection: ‘Dial-A-Poem’ by John Giorno (1968)

Callers to a US phone number access a random poem from an archive of more than 200 recordings of poetry and political oration by around 75 poets and writers. On the line might be the voice of William Burroughs, Allen Ginsberg, Patti Smith Deborah Harry or Frank Zappa. When Dial-a-Poem premiered in 1969 at the Architecture League in Manhattan, more than one million people called in just over four months. Today, there are multiple versions of Dial-a-Poem phones represented in museum collections. The recordings and the phones remain a testament to Giorno’s political engagement; many of the poems included explicit references to gay life and love. By 1970, Giorno expanded the archive’s revolutionary aims by adding poetry from The Weather People, Bernadette Dorn, Eldridge Cleaver and other vocal opponents to the Vietnam War.

With thanks to Erin Fleming, Content Producer in Interpretive Media, SFMOMA for the recommendations.

Image: John Giorno, poet and organizer of the Dial-A-Poem project, sets up a reel of recorded poetry at the Architectural League in Manhattan, Jan. 13, 1969. Courtesy: Patrick A. Burns/The New York Times/Redux