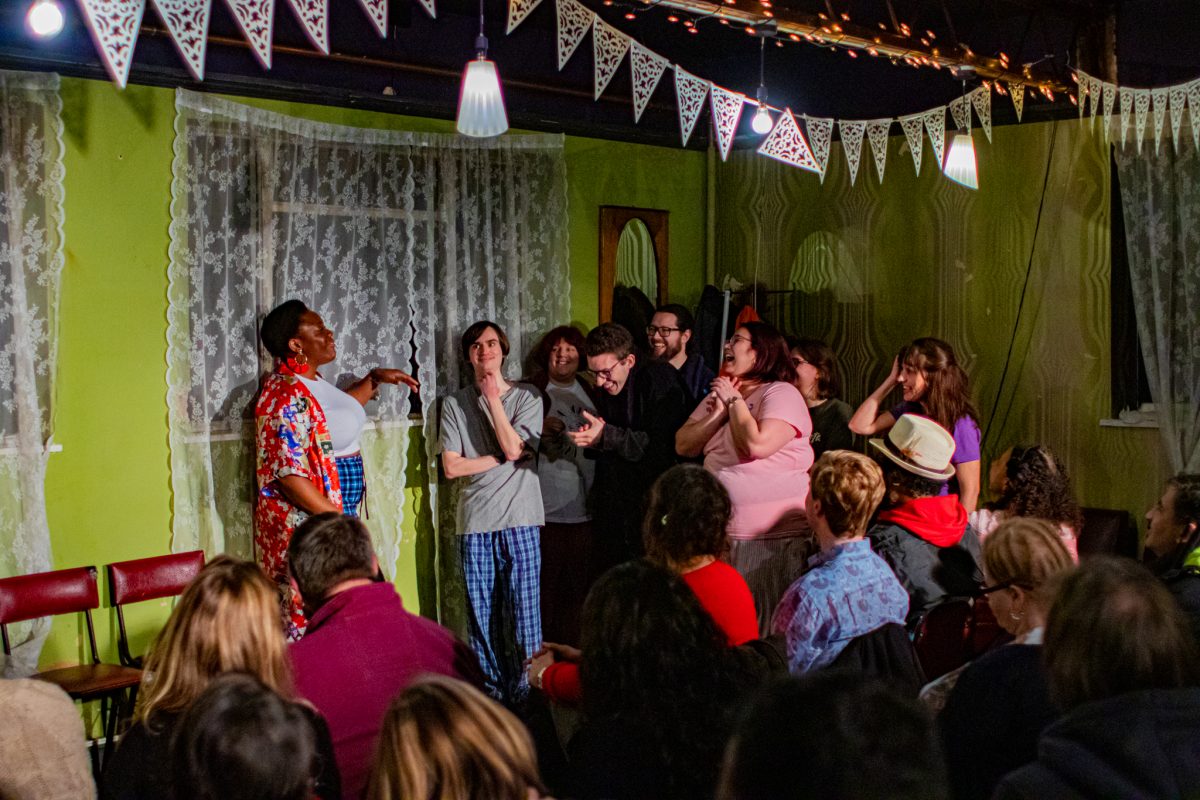 Welcome to The Interval, #25, your weekly selection of audio-described or accessible culture online.

We’ve been doing a bit of digital housework in our YouTube Channel. First off, we’ve created a playlist of all the audio-described videos that have been listed in previous editions of The Interval. We’ll keep adding them, and make smaller  playlists for individual genres or subjects, such as dance and ballet, opera, museums, Shakespeare, etc, which will hopefully make it easier for you to find something you’d like to watch. We’ve also created playlists featuring audio description by VocalEyes for individual venues. Subscribe to the VocalEyes YouTube Channel.

Coming up soon in the Digital Stage in Focus series with audio description:

ZooNation: The Kate Prince Company’s Some Like It Hip Hop, from Thursday 22 October 7pm until Thursday 29 October.

We’ll share these again with the links when their time comes. The audio description for Sadler’s Wells Digital Stage in Focus is by Talking Theatre.

I say, what do you get when over a dozen visually impaired comedians congregate for some covert comedy? Yes, it’s Eye Say, Eye Say, Eye Say!, 17 October, 6 – 7.30pm. Tickets: £5

Join Extant at this year’s Bloomsbury Festival on 17 October at 6pm for a night of eye-watering comedy from an awesome range of visually impaired comedians who will actually be performing together and live-streamed to you from a top-secret location and offering 20/20 insights on their diverse experiences living in the capital!

The Daily Telegraph’s reviewer says we should grow up and stop tittering, as the British Museum’s enlightening exhibition replaces Tantra-related clichés with revolutionaries, female empowerment and proper historical context. Find out for yourself with the exhibition curator Imma Ramos and  VocalEyes describer Lonny Evans. Register to receive the Zoom link for Tantra at the British Museum audio-described talk.

Three photographs by Turkish-born photographer and director Olgaç Bozalp, based in London will be audio-described. His work was featured in British Journal of Photography’s ‘Ones to Watch’ photographers of 2019, stating “Bozalp has been at the forefront of a movement to diversify visual culture, introducing new ideas about gender, beauty and race.” It has featured in Aperture’s ‘Element of Style’ issue, and published by Le Monde, T Magazine, Dazed, Replica and Dust. Book now for Slow Looking: Olgaç Bozalp on the Photographers’ Gallery website.

In normal times the Wye Valley River Festival is a biennial outdoor arts and environment festival which takes place in May: two weeks of unpretentious fun, joy and spontaneity. But this year it’s online, with the same eclectic mix of performance, installations, music and merriment rooted in the glorious landscape of the Wye Valley Area of Outstanding Natural Beauty that straddles the Welsh/English border.

The festival launched on Monday, 21 September with content remaining available on the website until the 10th of October. Festival Programme as audio file. Several pieces have been audio-described:

Desparate Men’s Cuckoo Time, a 7-episode series of short films about 5 contestants from 1,000 years in the future who get beamed into the Wye Valley in 2020 and have to find a portal to get back to their time (in which everyone is a digital form). Audio Introduction and 7 audio-described individual episodes available.

Nature and Landscape Now: a series of 3 short films followed by discussions by experts about preservation, conservation, and ecology. Each film has an audio introduction available below the video. The film rolls straight into a panel discussion which is not described.

Nature recovery in the Wye Valley

Marvellous meadows of the Wye Valley

Below is a brief description written by Tate’s Marcus Dickey-Horley, to help you visualise the artwork.

The tall granite plinth is topped by the top of an enormous white eight-metre-high Mister Whippy-style ice cream swirl, the bottom of which slightly overhangs the plinth. On top of this swirl is a two-metre-tall bright red cherry with a long green stalk. Crawling up the ice cream is a giant black fly. Perched on the cherry there is a black drone with its four copter blades spinning, transmitting a live CCTV image of that part of Trafalgar Square. You will not be able to get up high enough to touch the sculpture itself, but you can find a Braille panel on the south side of the plinth.

More information about Heather Phillipson’s The End. The sculpture is up for another year at least, so there’s no hurry to visit it.

Born and raised in the Bronx, New York, Thomas Reid lost his sight as a result of cancer in 2004, while working as an IT developer. With a strong focus on audio, Reid My Mind is a platform for Thomas to share interviews, stories, opinions in all media formats.

“It’s the message that concerns me, not the medium. It’s just talk if I complain about the lack of coverage or the negative portrayal of my peer groups; African Americans, those with vision loss, and in general anyone interested in sharing more positive images of the world. So this is my way to try and make a small difference.”

His most recent podcast is Flipping the Script on Audio Description. Do visit and give Thomas a listen at ReidMyMind.com.