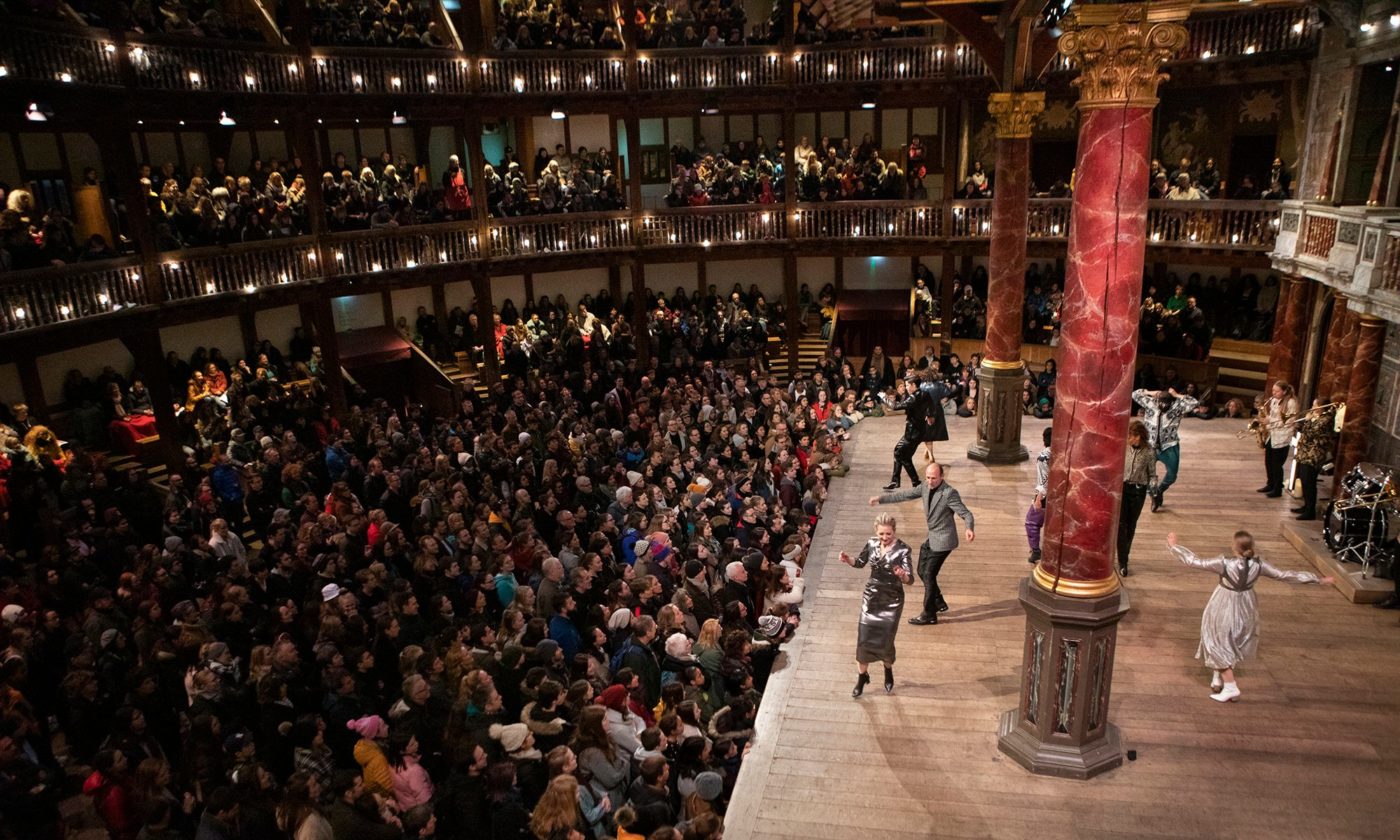 We promise this will be the last time we ask, but we’d be really grateful if you would – after you’ve finished reading this – if you haven’t already, take our survey for users of audio description at theatres, to learn your thoughts and opinions about re-opening, and live-streamed and recorded theatre events. It won’t take long, and the more responses we get, the better we can advise venues.

Now, we’ll start off with some theatre.

Available to watch until February half-term 2021, the Globe’s 2019 production of Romeo and Juliet is audio described by VocalEyes describer Ruth James.

From family feuds to love at first sight and offering a potent mix of tragedy and comedy, this production is from their Playing Shakespeare with Deutsche Bank series: a full-scale, fast-paced 90-minute performance designed to introduce students and families to Shakespeare. Watch on YouTube with audio description.

Crossing Care explores the journey of an Asian visually impaired woman and her support worker through everyday events, which instigate moments about frustration, joy and self-knowledge. A true-life story that investigates control, public perception and the subtle role reversals experienced by both characters; it is co-written and performed by Kirin Saeed and Sara Garcia Pereda.

The play is 40 minutes long without an interval and is followed by a panel discussion. Please email [email protected] to request the Zoom link which you will be sent on the day.

Online and console gaming has thrived and grown since the start of the COVID-19 pandemic. According to an article posted by University of Hull, within just four weeks of lockdown being introduced, the number of users who had logged into Steam rose by 50 per cent – from 16 million to 24 million. So, what’s accessibility for blind and visually impaired people like? Our CEO, Matthew, heard Sonali Rai of RNIB talk a bit about this at the recent Zoom AGM of the Audio Description Association and was really interested to hear some positive news.

Sonali told us about Last of Us Part II, which many are calling the most accessible game ever. It’s an action-adventure for the PlayStation 4. Five years after their dangerous journey across the post-pandemic United States, Ellie and Joel have settled down in Jackson, Wyoming. Living among a community of survivors has allowed them peace and stability, despite the constant threat of infected and other, more desperate survivors. However, a violent event causes Ellie to embark on a relentless journey to carry out justice and find closure.

The game has more than 60 different accessibility settings, allowing a higher level of customisation and fine-tuning than any previous game. Players who are deaf or hard of hearing can turn on direction arrows on subtitles to indicate where each sound is coming from; while visually impaired players can outline characters and enemies in vivid colours. Read more about Last of Us Part II in this BBC Technology article.

Accessibility features are one thing, but what about in-game audio description? We’re seeing marketing and promotion for more and more audio-described trailers for games on YouTube (such as Assassin’s Creed: Valhalla, for which you need to turn on the descriptive audio in Settings > Audio).

That’s great, but what about full audio description for every inch and every encounter of the game itself? This recent article by Luke Winkie for IGN, the US game and entertainment media website, discusses just that possibility, and is as optimistic as Sonali was when she spoke to us at the ADA AGM.

There are two things that are impossible to avoid in the news at the moment, the Covid-19 pandemic, and the US Election. While we hope that the Interval normally means some respite from both, this week, we’re sharing two items that do quite the opposite, and put you right in the picture.

Firstly, the Covid-19 pandemic. Blind and visually impaired people in Scotland can now learn about the latest data on Covid outbreaks near their home thanks to a website with a sonic interface. Developed by volunteers from a group called the Scottish Tech Army (STA), the site plays musical notes to create sonic graphs of Covid-19 cases that allow you to keep track of infection rates and fatalities, using the latest official data.

It borrows a technique used in high-energy astronomy where astronomers use audible tones to augment charts of complex information from parts of the electromagnetic spectrum invisible to the human eye.

Developed with the charity Seescape (also known as Fife Society for the Blind), it was designed primarily to ensure that blind people can make fully informed decisions about visiting or working in other areas. Visit the website at https://covid19.scottishtecharmy.org/

And so to the U.S. Election. Have you wondered what Kamala Harris, Jo Biden, Mike Pence and Donald Trump look like? Does it matter? Hear Christine Malec and J.J Hunt describe and discuss the appearance of US Presidential candidates and their vice Presidents – in episode 14 of the podcast Talk Description to Me, Harris, Biden, Pence and Trump. The episode raised interesting questions about the ethics of description – and the importance of physical appearance among politicians, and for me, the clear double standards expected of female and male politicians.

If you’d prefer to forget about the news, there’s still time to book for three events we promoted in last week’s The Interval: The Photographer’s Gallery Slow Looking: Olgaç Bozalp (Zoom), on Saturday 3 October at 3pm, Tantra at the British Museum, audio-described talk (Zoom) on 13 October at  14.30 and Extant’s Eye Say, Eye Say, Eye Say!, comedy on 17 October from 6 – 7.30pm.