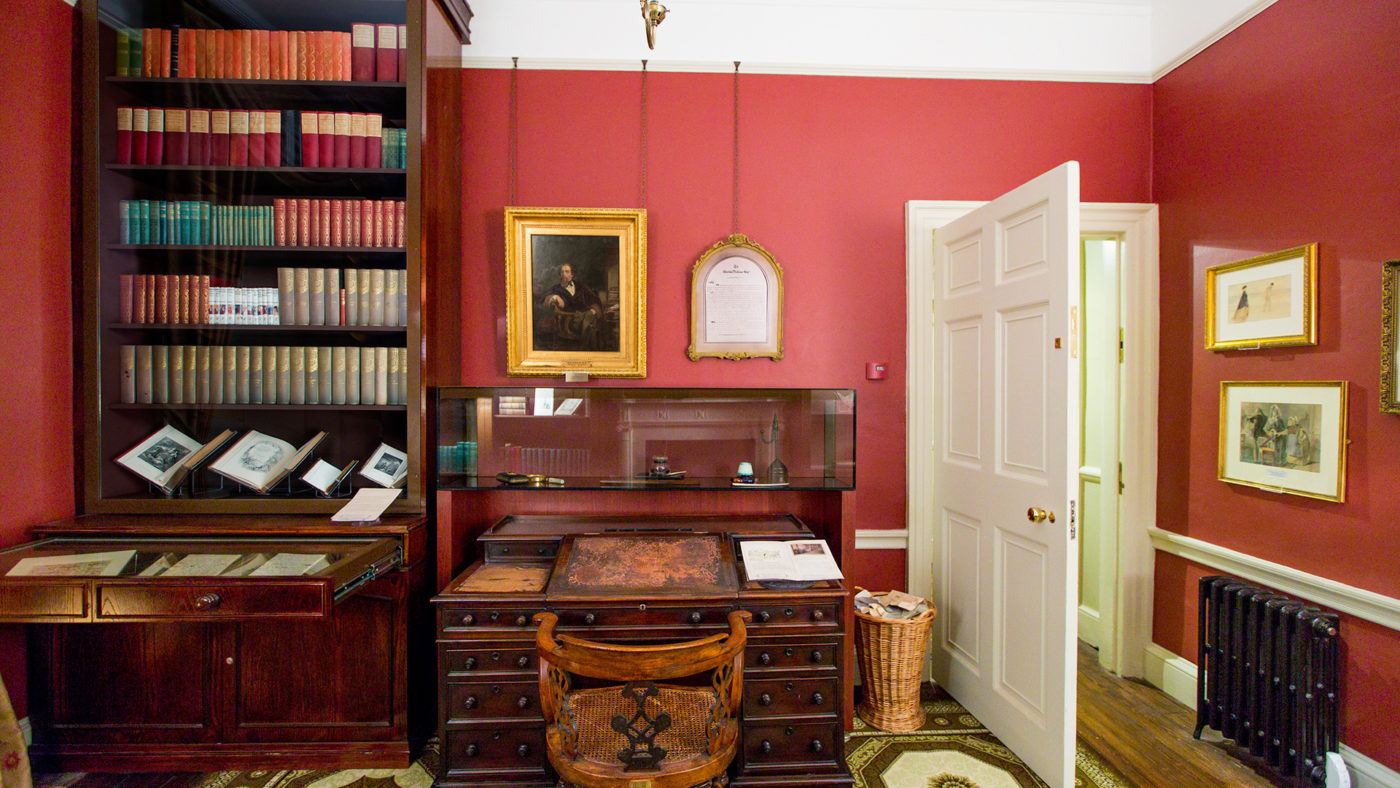 Celebrating our 50th edition of The Interval, VocalEyes’ weekly listings of accessible arts and culture. With the easing of lockdown restrictions, fingers crossed we will soon be returning to in-person arts and culture events! For now, here is the latest selection of online experiences.

Please note, VocalEyes is seeking blind and visually impaired AD editors for our 100 Videos Described project. Find out how you can get involved towards the end of this week’s edition.

Launching the new VocalEyes audio-description guide of this fascinating museum. Listen to a ten minute audio-descriptive introduction to the Museum for a brief overview of the building, services and what you can expect to see on a visit. There’s also a full audio-described tour of the Museum arranged in separate tracks with directions to help you navigate the house. Or alternatively the tour is available in a single track recording.

Dance Movement Therapy focuses on the physical, cognitive, social, emotional, and spiritual aspects of one’s being. Benefits include a greater body awareness, reduction in stress and anxiety, increase in mental and physical flexibility and benefit to emotional wellbeing. Register by emailing [email protected] to receive the Zoom joining link.

A multi-magician event, For the first time in 100 years, the secretive magic society, The Conjurors’ Club, pulls back the curtain for an interactive experience that redefines the face of modern magic. A recorded pre-show description will also be available on the A.R.T. website.

Join the monthly descriptive Zoom session, taking an in-depth look at works in the exhibition Masterpieces from Buckingham Palace. Book by email [email protected] or call 07860 612393.

Penguin Live in partnership with British Library, Bird is the Word with Bill Bailey, Sam Lee and Helen MacDonald, Friday, 9th April, 7:30pm. Online, available to watch for 48 hours after. £7.50.

Whether in the city or country birds surround us: sound-tracking our lives, visiting our gardens and brightening the skies. These authors share a fascination with birds and have spent hours in their company, studying their weird and wonderful ways, musing on the melodic beauty of their songs or reflecting on their place in human memory, love and loss.

Read how artist Shannon Finnegan finds creative ways to approach access, not just doing the bare minimum so disabled people can access art, but that they also want to access it. Her latest collaborative project reframes alt-text as a type of poetry.

Artistic Director and CEO Maria Oshodi joins The Space’s Creative Director, Fiona Morris and audio producer Clare Freeman for an episode of their new podcast series now available at to listen to on Spotify & Apple Podcasts. During her conversation with Fiona and Clare, Maria chats about the challenges of creating accessible digital content, the unexpected freedom of working off-stage and more.

You can read the full transcript of the interview  or listen to all the episodes in the Space Arts Podcast series which features a range of innovative UK artists.

A short poetic film featuring a newly commissioned poem by Raymond Antrobus reflects on the social impact of Covid19. “If you could only speak for as long as this match burns and every word would be remembered and acted on – what would you say?” Content warning: contains references to racist violence.

Enjoy a brand-new production of Mozart’s gleeful dissection of the highs and lows of young love, e, filmed at Glasgow’s Theatre Royal in a concert performance with a twist.

Welcome to the world as you haven’t seen it but ought to know it… Welcome to the wonderful and weird world of Home(body). This heart-warming, and at times chaotic, tale was written by Jasmine Lee-Jones for a group of participants from Thames Reach, a charity supporting people facing homelessness through prevention, intervention and recovery. the film’s themes are inspired by its extraordinary cast.

In the far future, human lifespan has been extended to incredible lengths. But as seen through the eyes of sisters Amy, Minny and Lucy, such scientific innovation must have consequences.

Learn about composers and their music. The podcast is compiled from the week’s programmes and published on Friday; it is only available in the UK. Latest episode features Maurice Ravel (1875-1937).

Maria Oshodi talks about the challenges of creating accessible digital content for Flight Paths (the stories of the blind Japanese female musicians, known as goze), and the unexpected freedom that emerged from working off-stage.

Uncovering some little-known quirky facts and oddities from the world of popular music.

Help unravel the new series in this TV companion podcast. Delve into the series with celebrity super-fans. Also available are Obsessed with…Peaky Blinders, Killing Eve and I May Destroy You.

Explore the world beneath your feet this Easter as Polka and Second Hand Dance bring you two light and airy films, Sunny Days and Insect Hands both with audio-description and accompanied by activities. Available 1st – 11th April, free, for all ages.

Between May and August 2021, VocalEyes will be working on a project called 100 Videos Described, providing subsidised audio description for films made by artists and arts organisations in England. We are seeking blind or visually impaired arts lovers to work as AD editors. We will assign an AD editor to each project; your task will be to watch the film with a draft version of the audio description and feed back to the audio describer any comments you have, to help ensure the AD is as good as possible. The films will vary in length, from sub-15 minutes up to 90 minutes. Most of the films will be at the shorter end. Editors will be paid, depending on the length of the film, between £20 and £75.

If you are interested, please contact [email protected] with your name, and a brief message about yourself and why you’d like to be involved. We’d ideally have at least 10 editors and would ask you each to do around 10 films, but this might change depending on interest. Matthew is happy to answer any questions about the project in the meantime.

A selection of TV programmes with AD to enjoy over the Easter break and the week ahead. Please note that these programmes subject to change but correct at time of publication.

My Years with the Queen, ITV, 9pm

Painting the Holy Land, BBc2, 9am

Film: Harry Potter and the Chamber of Secrets, ITV2, 5.55pm

Film: Harry Potter and the Order of the Phoenix, ITV2, 6.20pm

Queen Elizabeth and the Spy in the Palace, Channel 4, 9pm

The Day Will and Kate got Married, ITV, 9pm

Image: Study in Charles Dickens Museum, with a large wooden Victorian writing desk and bookcase against a deep red wall.