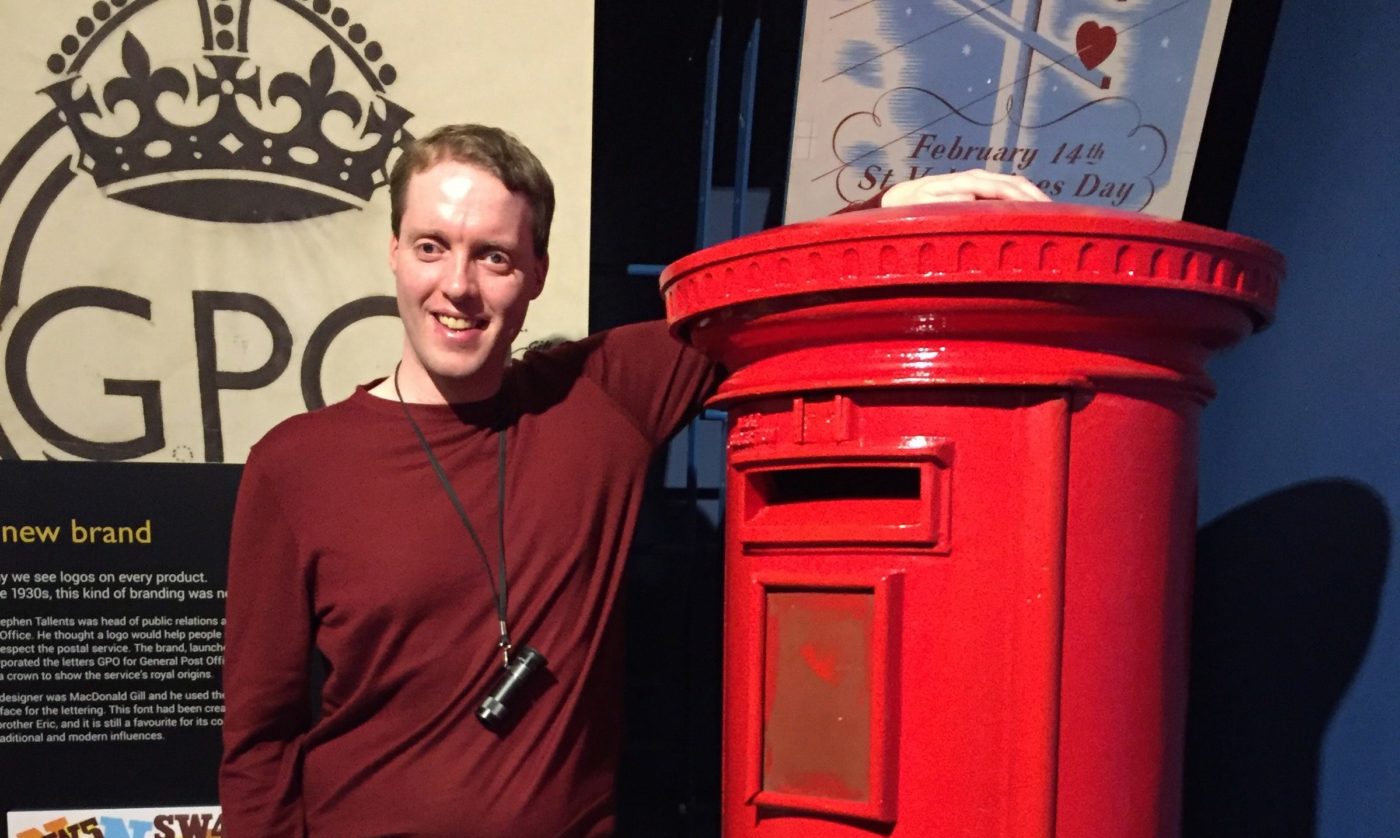 I was delighted when I heard the Postal Museum in London were starting audio-described tours. As a visually impaired person I love audio-described events, because they really help me to understand and appreciate what I’m looking at, and they’re a very easy and engaging way of learning about exhibits and their history.

The Postal Museum is a little bit hidden away, but there are directions on the website. It’s a short walk from a number of stations including Farringdon, Russell Square, Chancery Lane and King’s Cross St Pancras, as well as being served by a number of buses, and there’s a zebra crossing on its quiet road. There isn’t a big sign outside the entrance, but the large window display is easy to spot if you have some vision. Inside, I really liked their large high contrast wall signs for the stairs, lifts, toilets, etc.

The tour was led by VocalEyes audio describer Di Langford and Chris Taft, Head of Collections at the Museum. They made a great team, with Di describing the exhibits very clearly, while Chris gave us their historical context. Other staff members were also present to offer assistance, which made it feel really well supported.

The postal system is something we very much take for granted, especially in this age of instant online communications. Yet the history of mail delivery is both interesting and important, because it’s had a vital role over the centuries.

Many of the key exhibits were described to us, including an old mail coach, Penny Black stamps and advertising posters. We were able to hold a replica Victoria Cross medal and a long post horn, amongst other objects, and we listened to some Morse code; so the tour was very interactive.

But for me the most exciting aspect was riding the Mail Rail. I assumed I might be too tall for it, but I actually got into the carriage comfortably. I just had to mind my head on the door frame as I boarded!

The ride lasts about 15 minutes, and had a very informative audio commentary playing throughout. It’s not audio-description, but is well worth listening to. The train ride is slow and steady, and stops a few times in brighter areas for you to look at your surroundings and the films projected on the walls.

I could see a few things here with the aid of my monocular, but fortunately Di was in my carriage describing things, which was very useful, while other people had their companions describing the sights. However, if you’re unable to have someone with you, or if you don’t want to go on the train, you can watch a separate audio-described film instead so you don’t miss out. It’s great that they provide that option.

We then finished by exploring the Mail Rail exhibition – again supported by audio-description – including a map of the railway, engines and cars from the original trains, sacks and containers in which mail and parcels were carried, a little electric model railway that you could play with, and an interactive signalling desk where we were shown how to direct trains around a map of the railway. We also tried sorting mail into boxes in a simulated moving train carriage, which was fun.

The tour was very enjoyable and enlightening. The staff were friendly and helpful, the audio-description was clear and detailed and there was ample opportunity for discussion and questions. It’s made me want to return to explore the exhibition in even more detail, now I feel familiar with it. So, it’s well worth a visit.

Glen Turner is a visually impaired blogger and Youtuber based in London.