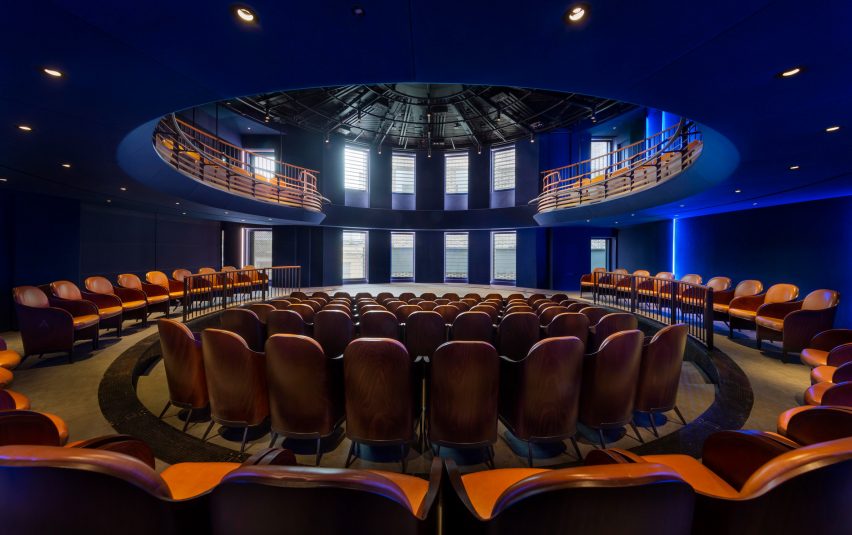 The address of Boulevard Theatre is 6 Walker Street, W1 0BT.

As well as local on-street parking there are car parks at NCP Brewer Street (130 metres) and Q-Park Chinatown (480 metres). As a guest of the Boulevard you can also secure a 10% discount on nearby parking by using the code BOULEVARD10 at YourParkingSpace.

Our theatre does not have any parking bays of its own, but the closest roads with parking spots for Blue Badge holders are:

If you’re travelling by bus, the nearest bus stop is Trocadero/Haymarket (Stop K) on Shaftesbury Avenue. Buses 14, 19, 38, N19 and N38 all stop there. The bus stop is 150 metres from the entrance to the theatre. (Head East to the end of the block and turn Left onto Rupert Street. Head North three blocks until you reach the entrance of the theatre. This route traverses two roads (Winnett Street and Brewer Street). Brewer Street can be slightly busy at times, but it is only a one-way street (traffic coming from the left as you approach to cross). As there are right in the middle of Soho the streets can be very busy most times of the day.

The Theatre is served by the following underground stations and lines:

Piccadilly Circus (Bakerloo and Piccadilly lines; 500 metres) (Head North from Piccadilly Circus Station along Shaftesbury Avenue for two blocks. Then turn left onto Rupert Street and continue northwards four blocks until you reach the entrance to the theatre.)

Oxford Circus (Bakerloo, Central and Victoria lines; 800 metres) (Head East from Oxford Circus Station along Oxford Street for five blocks. Then turn right onto Berwick Street and continue southwards four blocks until you reach the entrance to the theatre.)

There is a taxi rank directly behind the building on Brewer Street. (Head South from the entrance of the theatre down Walker’s Court for 50 metres). It operates 24 hours a day and has a capacity of 5 taxis.

Our Box Office is also able to help with any transport queries and can book cabs for patrons where necessary.

The main entrance to the Theatre is on the corner of Walker’s Court and Peter Street. The front of the building is mainly curved glass, with a glass door on the ground level and then brick and windows going up another three floors above. There is a large neon sign above the door that says ‘Boulevard’.

Directly to the right of the main entrance is Walker’s Court and a glass bridge that spans it. On the bottom of the bridge are the words ‘Theatre Restaurant Bar’. The Box Office desk is visible through the glass frontage (with the words ‘Box Office’ above it) as well as a large LED screen showing the latest show information.

Entry into the building is through a curved glass door that is held open at all times when the building is open. It is also at street-level, so no steps, ramps or lips to negotiate. There is a second automatic glass door to the right of the building (on Walker’s Court). However, this is an exit only and is closed to the public unless needed in the event of an evacuation.

All of our Front of House staff wear a blue shirt with the letter ‘B’ logo embroidered on the chest. As soon as you enter the building there will be someone at Box Office who can assist you. They can also call for an Access Usher for any further assistance required.

Lighting levels are relatively consistent throughout the building. The stairways can be a little dimmer than the main restaurant / bar areas. As a large part of the front of the building is glass, we get plenty of natural light into our Front of House spaces, especially during the daytime. Background music is played in the Restaurant / Bar on Level 1. As we are relatively open plan in terms of Level 1 and 2, sound from conversation can carry across both levels when the space is busy. There is currently no music played in the Box Office area.

There is a lift available from the Box Office on ground floor up to the Restaurant and Bar on Level 1, as well as the Auditorium on Level 2. All levels can also be accessed via public staircases.

There is a large Restaurant and Bar located on Level 1. Both open for service in the morning from 8.00 am. Please visit https://boulevardtheatre.co.uk/your-visit/food-drink for more information.

The Restaurant / Bar on Level 1 doubles up as our foyer. It has a long bar on the right hand-side with the restaurant set up at the end of it. Running along the left-hand side of the room is seating and small tables. The bar side of the room has dark red walls with the restaurant in pink. The décor is in a slightly art deco style. The Restaurant and Bar on Level 1 do feature some tall tables with high stools around them, particularly near the foot of the staircase that takes you up to the Auditorium level. However, a path is clear, and an Access Usher is available to assist.

There are two levels to the Auditorium; Stalls and Balcony. There are two entrances; one into the Stalls on Level 2, and one into the Balcony on Level 3. There is lift access to both. The walls of the auditorium are a dark blue colour and the free-standing chairs that are used for seating, a light brown. All seats in the auditorium flip up. The seat numbers are located on the tops of the chairs (black numbering on a gold plate). The Balcony is made up of one row (A), which is accessed via two steps once you have entered the auditorium. All rows are numbered from 1 in an anti-clockwise rotation around the space.

There is a Stalls Lounge on Level 2 where patrons can wait just prior to the opening of the Auditorium, should they wish to beat the rush. There is also a bar and an accessible toilet available on that level.

Most if not all of our access patrons will be seated in the Stalls. Upon entry you will be met by two ushers that can assist you to your seats.

Performances in the Boulevard Theatre can be performed in the round, with the seats positioned in a circle around the performance, or with the stage at the end of the auditorium – end-on configuration. The auditorium holds 151 seats in the in-the-round configuration (115 in the Stalls and 36 in the Balcony). The Stalls is principally made up of two rows (A and B) with a further few high stools (Row G) located on one side of the auditorium.

Performances in end-on configuration seat a total of 169 patrons (115 downstairs and 54 upstairs). In the stalls there are 4 straight rows facing the stage with an extra horseshoe of seats behind them. The balcony has 36 seats in one front row. Additionally there are 18 perch seats – fold-down high chairs – and patrons are also able to stand along a raised platform behind the front row. The stage can be at either end of the auditorium as the stage, stalls and balcony can all revolve.

There is an accessible toilet located by the Restaurant Bar on Level 2 as well as another one located by the Auditorium / Stalls Lounge on Level 3, directly next to the lift.

Wheelchairs and walkers can be left with one of our members of staff and brought to the patron as needed at the end of the performance. With prior arrangement, we also have an in-house wheelchair that patrons are welcome to use. A dedicated Access Usher is also on hand at every performance to assist patrons as needed.

We are able to take some coats and bags at the Box Office should anyone wish to deposit anything.

Assistance and guide dogs are welcome into the theatre and the auditorium. Patrons have the choice of taking their dog into the auditorium or having the dog looked after by a member of staff during the performance. It is helpful if patrons can give us prior notice of bringing a dog. Please call the Box Office on 020 3968 6849.

Patrons collect their tickets at Box Office, as soon as they enter the building. Headsets are also be available from the Box Office alternatively they can be requested from any member of staff who will bring a headset to the patron. There is no deposit for headsets; however, we do take customer details just in case there are any problems. Both the Braille and large print cast lists will be available from the Box Office.

The Theatre uses a radio system for audio description. The radio signal is transmitted across the whole auditorium. Receivers, either stethoscope models, or belt-pack models with separate headphones, will be supplied by the theatre, and staff will demonstrate how to use them. You may want to bring your own headphones and request a belt-pack receiver.

If patrons have any questions or require further information before attending the theatre, they can call the Box Office on 020 3968 6849. All of the relevant access information for the theatre can be found at https://boulevardtheatre.co.uk/your-visit/accessinformation

Patrons with access requirements are encouraged to join our Access Membership scheme, which allows them to purchase up to two tickets for any performance (excluding late-night and Sunday performances) at the rate of £18 per ticket. It is completely free to join.