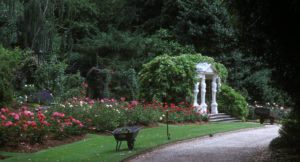 The Garden at Buckingham Palace is situated at the rear  of Buckingham Palace and covers 42 hectares. Buckingham Palace Garden is not usually open to the public and is where the Queen’s garden parties are held. The landscape design was by Capability Brown but the garden was redesigned  by William Townsend Aiton of Kew Gardens and John Nash.

The central feature of the garden is a three-acre lake created in the 19th century. Other highlights include a 156-metre herbaceous border, the wisteria-clad summerhouse, the rose garden, and one of Britain’s biggest garden ornaments — a 15-foot Waterloo Vase carved from a single piece of marble weighing an estimated 20 tons.

The trees include plane, Indian chestnut, silver maple, and a swamp cypress, and  a single surviving mulberry tree  from King James I ‘s attempt to breed silkworms.

By coach: Victoria Coach Station is a 10-minute walk from the Palace.