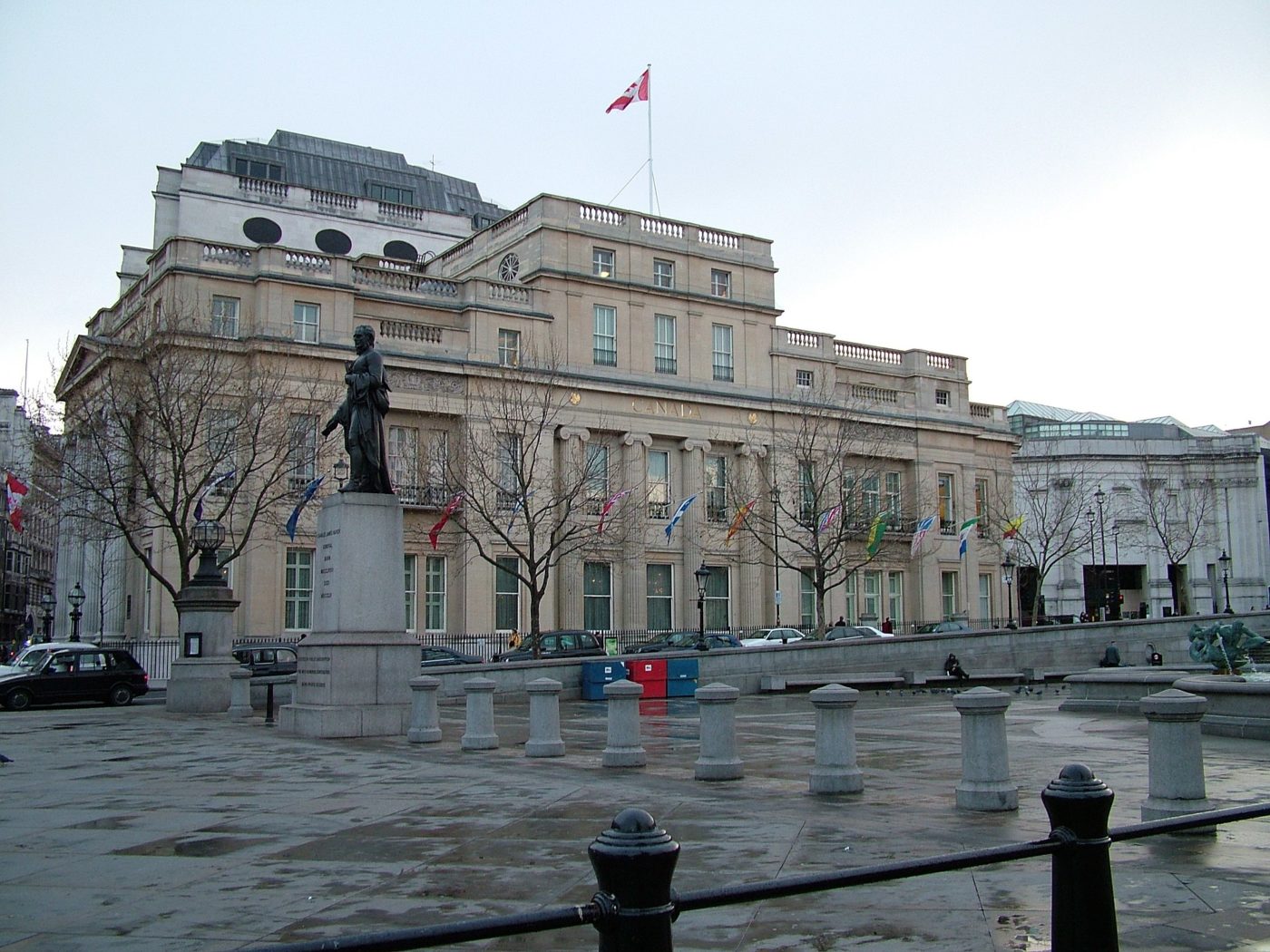 Canada House has been the centre of Canada’s presence in the UK from the time it was first envisioned by High Commissioner Peter Larkin in 1922. It is an important part of Canadian history in the UK, with a place in the memories of thousands of Canadians.

From the 18th-century traders who met in Garraway’s coffee shop, to the poutine shops of Shoreditch, to the Governor of the Bank of England, and the CEO of the Royal Mail, Canadians have always been present in London. Likewise, the city has been at the heart of Canada’s relationship with the UK.  Canada House in Trafalgar Square represents the longstanding camaraderie between the two nations.

Early in 1922, a Canadian tea merchant named Peter Larkin arrived in London. He was a natural marketer who had created Canada’s iconic Salada Tea brand and he set out to put a new face on Canada in the UK. From the time he was appointed High Commissioner to the United Kingdom on 10 February, by Prime Minister Mackenzie King, he was charged with consolidating all of Canada’s activities in Britain.  Larkin settled on the Union Club on the western side of Trafalgar Square.

The Union Club’s stately Greek Revival building was originally constructed between 1823 and 1829 to designs by Sir Robert Smirke, the renowned architect of the British Museum and the Royal Opera House. It had been a prestigious gentlemen’s haunt, frequented by the likes of the Duke of Wellington, Cecil Rhodes, and Charles Dickens, when Canada acquired it in 1923.

Canada bought the building for C$1million. Renovations, under the guidance of architect Septimus Warwick, cost C$1.3million at the time. The building was extensively remodelled, the exterior reclad in Portland stone and the entrance moved from Trafalgar Square to Cockspur Street. Warwick was determined that the building should be a window on Canada, and ensured the High Commission’s new home reflected the very best contemporary Canadian craftsmanship.

On 29 June, 1925, Peter Larkin handed King George V a set of keys fashioned in precious metals from Canadian mines. Keys were also entrusted to Queen Mary, to Larkin himself, and later to Mackenzie King, who had remained in Canada to address the parliamentary budget. With his key, King George unlocked the heavy bronze doors and Canada House was officially open. An assortment of high-ranking officials, dukes and princes of the Empire attended to celebrate the lavish occasion.

In 1964, Canada House expanded next door, acquiring the lease to the adjacent Royal College of Physicians. Once work to unify the two buildings was complete, Canada occupied the entire western front of Trafalgar Square. Around the same time, Canada also acquired the building that had previously been the American Embassy at 1 Grosvenor Square, and renamed it Macdonald House, in 1963.

In 2012, Canada decided to unite the High Commission once again. It acquired 2–4 Cockspur Street, the former Sun Life Assurance building, immediately west of Canada House. The acquisition was the first step in a plan to bring every facet of the High Commission’s activity under one roof on Trafalgar Square.

In that spirit, the renovation that started in 2012 celebrates and represents Canada today with spaces that welcome Canadians and their guests.

The Queen and Prince Phillip opened the refurbished Canada House on Thursday 19 February  2015 when The Queen was presented with a set of keys to the building, a similar set to the one presented to her grandfather, King George V, when he opened the building in 1925.

Within Canada House you will find Canadian materials and furnishings, the work of talented Canadian designers, artists and craftspeople, surrounded by Canadian wood, granite and marble.

The new design of Canada House respects, preserves and, in some cases, restores the building’s heritage. The space that originally housed the two-storey library of the Royal College of Physicians has been reinstated and is now the home of Canada’s trade representatives at the High Commission.

In tandem with the effort to preserve and respect the building’s heritage, the new Canada House highlights Canada in the 21st century and incorporates natural light and fresh air.

Canada is the world’s largest exporter of wood and so it follows that this is a unifying building that uses Canadian wood throughout.  From the Canadian red oak floors and Canadian hemlock-clad atrium to the naturally -enhanced pine in the Pacific Room and the many wonderful furnishings.  Canadian marble and granite complement the heritage marble from the 1820s that still creates the elegant floor patterns in the Trafalgar Square lobby.

To show the diversity of Canada’s federation, the meeting rooms of Canada House are named after each of the country’s ten provinces and three territories, as well as the three oceans that wash Canada’s coasts. To capture the spirit, landscape and creativity of each province or territory, the rooms are furnished with artwork by the artists from that province or territory, with furniture created by designers and manufacturers from that province.

Canadian artists show their imagination, creativity and unique ways of seeing the world throughout the building. There is the painting by Gordon Smith at the Cockspur Street entrance, the striking Riopelle lithograph in the Quebec Room, and Gathie Falk’s Arsenal of snowballs in the Trafalgar Square lobby and High Commissioner’s office. There are photographs by Scott McFarland and Ned Pratt, and a tapestry by Anna Torma in the New Brunswick Room. Carpets designed by Canadian artists in each provincial, territorial and ocean room add colour, warmth and life.