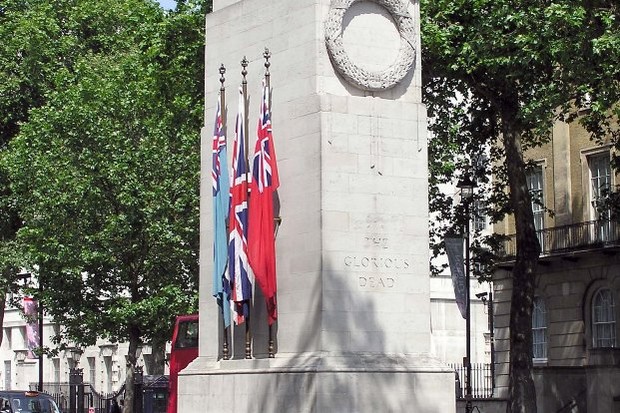 Originally, it was to be a temporary structure of wood and plaster, erected for a peace parade at the end of World War I;  following an outpouring of national sentiment it was replaced by a permanent structure, designed by Sir Edwin Lutyens, and built from Portland stone, between 1919 and 1920.  An annual National Service of Remembrance is held at the site on Remembrance Sunday, the closest Sunday to 11 November (Armistice Day).  Lutyens’ simple design has been reproduced all over the world.

‘Its terrible simplicity’, says newscaster Alastair Stewart, ‘rises up without apology, in honest recognition of something that went wrong,…. at the very heart of where we do our politics and crown our kings and queens.’

Alastair Stewart worked with VocalEyes Describer Wendy Moor on the description of The Cenotaph for London Beyond Sight (2012).

On exiting Westminster tube station, turn right and walk with your back to the Houses of Parliament.  At the traffic lights turn right into Whitehall and continue past the Red Lion Public house.  The Cenotaph is in the middle of the road just in front of the Foreign and Commonwealth Office which is on the opposite side of the road.

There is limited accessibility as the monument is in the middle of a very busy road.