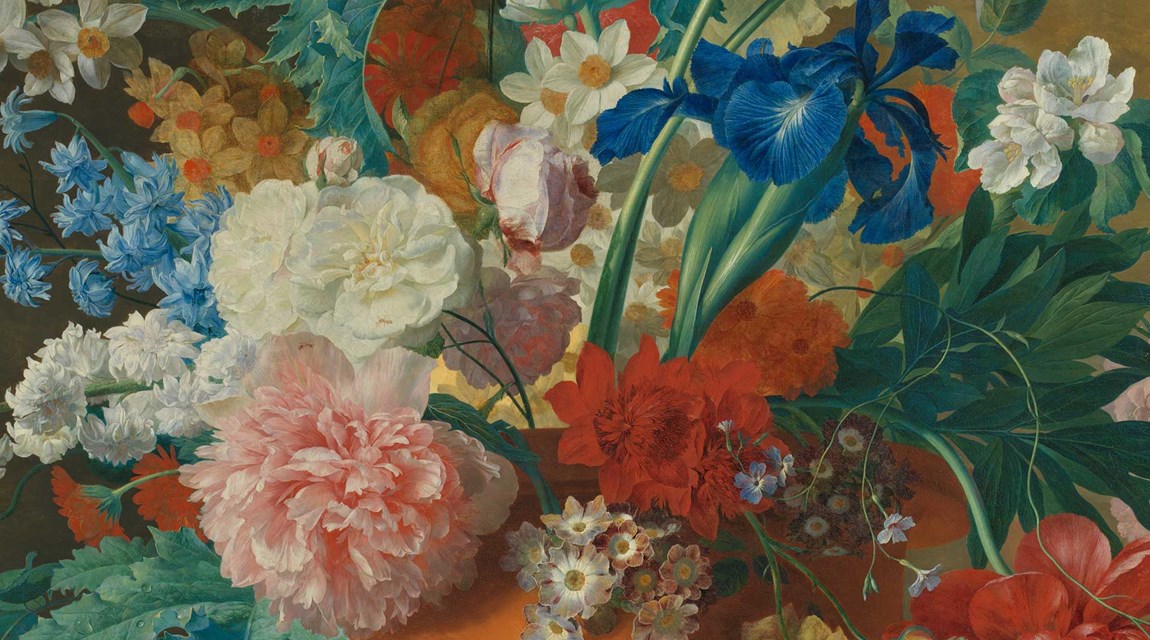 Follow the tour of Jan van Huysum’s ‘Flowers in a Terracotta Vase’ to a series of unusual and unexpected locations throughout the UK. The painting is now on display in The Walled Garden, beside the Murray Royal Hospital in Perth until Sunday 8th August. The theme for this stop is ‘Care’. If you can’t visit the venue in person, listen to the VocalEyes audio description of the painting.

Visit two exhibition venues from Edinburgh Art Festival’s programme, at the Burns monument on Regent Road and the Collective Gallery on Calton Hill. There will be descriptive BSL interpreted tours of the art exhibitions at both venues and an opportunity to join a leisurely descriptive walk up Calton Hill between the two venues. Refreshments available at the Collective Gallery.

Tennessee Williams’ innovative psychological thriller. Faced with an empty stage and an expectant audience, two actors have to adapt and perform the only appropriate work in their repertoire.

Everything that can go wrong… does with the accident-prone thespians at The Cornley Polytechnic Drama Society. Watch the actors and crew battle against all odds to make it through to their final curtain call, with hilarious consequences!

A joyful explosion of vivid chaos welcomes you back to Shakespeare’s Globe. A Midsummer Night’s Dream returns with piñatas, streamers, glitter, and a cacophony of brass.

The captivating and moving tale of twins who, separated at birth, grow up on opposite sides of the tracks, only to meet again with fateful consequences.

A concert performance in The Watermill Gardens. This wondrous family musical blends five of Rudyard Kipling’s Just So stories to tell a tale of courage, friendship, and the power of an individual to make a difference.

Join a joyful celebration of togetherness, hope and friendship as individuals transform into an eclectic community bound by music, magic, and some very strong coffee at the Bagdad Café.

A sea-drenched stranger arrives to Illyria, a society in limbo, and unexpectedly unleashes the chaotic and transformative power of love. A fiery new production of Shakespeare’s play infused with the mesmeric nostalgia and soulful music of the world of Americana.

Join staff and dancers from Scotland’s national dance company take on some big discussions facing society today, shining a light on what the ballet industry can do to become more transparent, diverse, inclusive and equitable. Special guests join a frank conversation about the world we live in, and where a ballet company fits into it.

This short film doesn’t take itself too seriously, and follows Finn, who, trying to relax, takes a bath, unaware there is actually a shark under the water, about to bite at any moment.

Join Beth Watson and Pippa Sa talking about gender representation on stage with a different special guest on each episode. Latest episode – Salt, with Selina Thompson and Rochelle Rose.

In a recent student work placement, a team of non-blind History of Art students created a set of audio descriptions of artworks and objects. There will be two recordings of each object, an audio description from the perspective of the student viewer and additional information, giving context around the object. Listen on YouTube to Neidpath Castle, Red and Black and Entombment amongst others.

Listen to this epic adaptation of Victor Hugo’s classic novel in which an extraordinary cast of characters struggle to survive in war-torn France. A story of love, injustice, redemption and hope.

The Wonder of Bees with Martha Kearny, BBC4, 7.30pm

The Queen and her Prime Ministers, Channel 4, 9.30pm

Inside Monaco: Playground of the Rich, BBC2, 8pm

Write Around the World with Richard E Grant, BBC4, 9pm

Image: A close up of Jan van Huysum’s painting ‘Flowers in a Terracotta Vase’. Peonies, iris, bluebells and other flowers in a colourful arrangement.